Have you ever wondered how NOT to use Twitter? Probably not, but I’m here to tell you. According to HowLongHaveYouBeenTweeting.com I have been tweeting for 1 year, 2 weeks, 3 days, 16 hours, 16 minutes, 46 seconds. Little do they know that I was really incubating in my tweetless nest for most of that time. My first tweet came out last October after two colleagues went to an education conference. They came back and told me that educators were using Twitter to stay connected and share resources. Oh, yeah?  I love to learn new things, so I hatched right out of my Tweet shell and chirped a message to  the whole world. To the world? Maybe not. Actually, it went out to my one friend who had become my follower. She probably didn’t even have her TweetDeck open.

In the past three months, I have made some important Twitter mistakes. So, without further ado, here are my top unlearnings about Twitter. What NOT to do!

1.  Don’t tell anyone when you are talking to them.

In the above tweet, in my make-believe world, I was part of a conversation with my NaNoWriMo novel-writing friends following @nanowordsprints, but I forgot to mention it in my tweet. At this point in my Twitter history, I still had one follower, and since she was not writing a novel with me, she didn’t know what I was talking about. After a few tweets like this and noticing mine were not showing up in the Twitter stream, I did finally catch on and began to reply back so my voice could become part of the conversation.

Yes, one of my very first tweets was about skinny dipping. I may have used the dare machine on NaNoWriMo. I honestly don’t remember why I wrote a skinny dipping family into my novel and reported it during a word sprint. * Not such a proud moment in my profile building, or brand, as Angela Maiers calls it.  (*11-4-11 — I outlasted MyTwitterWeighsATon, but I still wouldn’t recommend tweeting about questionable activities.)

This tweet was sent when I first started to get it. I was so excited to say something to the people in the room with me as Angela Maiers spoke to us at a Digital Literacy Conference. “Brenda, Mary, Eileen, Stacy, Erin and Angela!” Here I come, world! I tweeted out. Stacy sweetly explained to me that using the hashtag in that tweet probably wouldn’t get all of my friends to see it. I needed the @ or mention symbol. Thanks, Stacy!

4.  Don’t leave any room for Retweeting.

Yes, once in a while I have something valuable to offer. Like the tweets about word clouds, NEH Landmarks in History free with stipend summer workshops, and my new favorite the Flickr CC search toy. However, when you use every single one of your 140 characters to tell about the wonderful resource you are sharing AND put the URL at the end of the message, it’s a hassle for others to RT your great find. Especially when they are novices like me.

Now, not only did I want to share my What Not to Do Twitter Non-Guidebook. I do want to conclude with two more things that you should do. I’ve learned from the best of them…

Do Be Gracious to Others

So many people are out there to help us newbie Twitterers. They are playing nice in the digital world. Thanks for everyone who is patient with us when we make mistakes. (Number 7 on our class netiquette list.) Also, a big thanks to those who are teaching me good etiquette in a new medium. So, for those of you who haven’t started yet, go ahead and get an account.  Have fun, because even though I do the things in my Non-Guidebook, people are forgiving and kind.

Ron retweeted this announcement about NEH Landmarks of American History workshop,  changing my hashtag to a more useful one. (Notice it had to be continued on deck.ly because I had hogged the 140 characters. Non-rule #4 above.)

Beverly offering thanks and reciprocation for our students’ blogging efforts.

Nancy retweeting my blog post. How nice is that? I was nervous because it was my first attempt after the Kick Start Your Blogging Challenge ended. Not only did she read it, but she retweeted it. I receive other messages thanking me for following or commenting on student or teacher’s creative work. I’m learning from others in the Twitter community how to be patient and kind with others.

Usually, I’m pretty confident to just dig in and figure things out, but, for me, Twitter is one of those things that has a steeper and more slippery learning curve than some of the other tools I’ve used. Here are helpful posts that I finally read about three months after I got started. In the past few days, I’ve learned so much that I probably wouldn’t have had to write this post had I done the reading earlier. 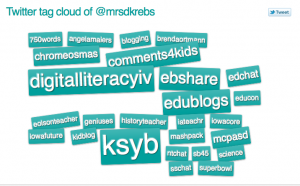 Jessica Hische’s “mom, this is how twitter works” – Not just for moms!

What about you? Do you have other things to add to my What Not To Do Non-Guidebook for Twitter? What other important things are on your DO List for Twitter? I’m learning, so I’d love to hear more!