Reform Symposium Conference just got over. Moments ago I “stepped” out of the last room, so I’m going to start there, reflecting backwards over the weekend.

While I was in the final room enjoying the afterglow of a lovely weekend, Ian @ianchia announced the first ten raffle winners. My name topped the list, and I won several iPad apps. Yippee! Now I just need to get an iPad! (Not to worry, our school just received funding to buy several for this year!) 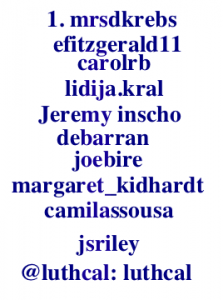 Principal El, Lisa Nielsen, Alec and George Couros, and Steve Wheeler gave inspiring keynote addresses. These were the only ones I was able to hear, but there were many others too. What great quality speakers, such a long varied list!

The panel discussion with Tom Whitby, Steven Anderson, Joquetta Johnson and Naomi Harm was stimulating. I was making crepes in the kitchen while taking notes like crazy, which has spurred another drafted post. More about that later…

Some of the sessions I was able to attend were by Lynn Boyle on creating an online community of learners, Jo Hart on keeping a finger on the pulse of your PLN, Kimberley Rivett on literacy in the digital age and Janet Bianchini on using cartoons in language learning.

Most of Saturday and all of Sunday, I was able to relax and participate as an attender. However, on Friday afternoon and Saturday morning I had some responsibilities. I was the moderator of Jo’s and Kimberley’s sessions, and I led a session about one way to map our global connections.

I am not at all a nervous person, but these minor responsibilities had me stressed out for several days! Yikes! But it was all worth it. We don’t grow unless we push ourselves, and I did grow in many ways.

Prior to RSCON3, I had not heard of Reform Symposium Conference. I saw the first RSCON3 tweet about the first of July. It looked interesting, so I added the hashtag to my TweetDeck and lurked about for two weeks or so. Somewhere during the month I became convinced, registered, and began tweeting about it. Then, shortly after that, Clive Elsmore, tweeted that he was looking for some back-up or reserve sessions.

I thought, “Hmmm, that sounds easier than a normal session. Maybe he needs someone at 3:00 a.m. or maybe he just needs me if someone gets sick or has technical difficulties.” I didn’t think very long before I said I would do it. I am not an experienced presenter, but I was willing because I know that teachers learn more than their students, and I am a devoted lifelong learner. I was curious to see what it was like to present at an online conference.

I realized I was way out of my league when I went to the Elluminate training sessions. I attended one and watched the other two recordings of Jo Hart’s trainings. Then I went to another training with Shelly Terrell. Finally, I spent some time in the practice room, and thanks to some one-on-one tutoring by Chiew Pang, I was able to have some great rehearsal time using Elluminate. Jo Hart also spent time with me in her room helping me get ready for moderating her session. What a perfect way to start my responsibilities at RSCON3–moderating for a pro. Everyone was so very gracious!

Later that afternoon, I was able to help Kimberley during her session using some of the things I had learned in Jo’s session. It was nice to have help moderating from Sonya too.

Little learnings along the way…

I’m so thankful I moderated and presented early, and then had most of the weekend to relax and enjoy the other sessions.

Thanks to all the organizers and presenters for sharing their genius with the world and for challenging us to be more effective educators.

7 thoughts on “Thoughts About #RSCON3”