I learned about something new today from fellow Slice of Lifer, Patricia at Jump Off; Find Wings. She mentioned her inspiration for the day was The Isolation Journals by Suleika Jaouad, so I went and discovered a new community of writers who are writing about this time of quarantine.

Joy Kirr has been writing daily, as well, documenting her observations and learnings during this quarantine time. She’s on Day 66, at this writing.

Though I have written more than ever in the past three months, I haven’t done it daily, so I think I will give it a try starting with Day 50/100 using prompts from The Isolation Journals. We are on Day 85 here in Bahrain of no more school, and into the foreseeable future.

Today’s prompt is about taking an object in your home and explaining it to someone who might wonder why it was there. The prompt was by author Sloane Crosley. 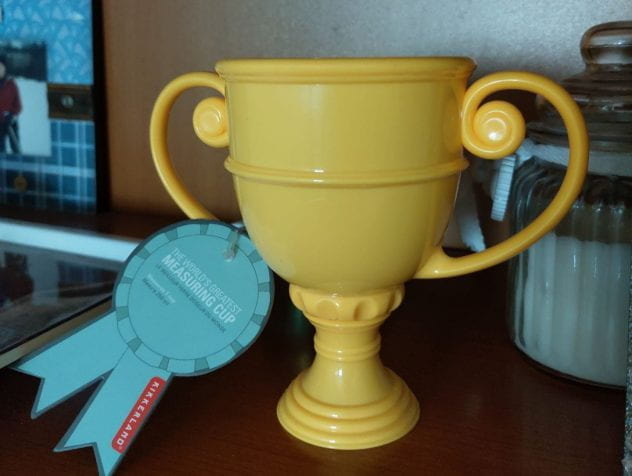 Really, who would need an explanation for this treasure? Wouldn’t everyone want to have the “The World’s Greatest Measuring Cup”?

However, this one is special, and it rests on a shelf in the living room, not the kitchen. It is the loving cup trophy for our biannual Family Christmas Day Pancake Cook Off. The Cook Off started when our girls were younger and we did it every year. However, now with marriages we’ve gone to every other year because there are two families vying for Christmas celebrants. The last three events we voted for the winner and presented a trophy.

In 2014, just Katie, Maria and I celebrated Christmas in Seattle. We made three delicious pancakes. We didn’t vote for a winner.

In 2015 Thomas and Katie came to Bahrain. We all made pancakes, and Thomas won with cinnamon roll pancakes.

in 2017, Thomas and Katie were in Bahrain, and Thomas won again with a delicious McGriddle knockoff.

Yet again, in 2019 Thomas brought the trophy back to Bahrain for the cook off. In addition to Thomas and Katie, Janzen and Maria came to Bahrain this year, too. We had four pancake entries–Oreo pancake, chocolate-lemon, East meets West Appam, and the winner was Blueberry Streusel Muffin pancakes, and Katie took the trophy away from Thomas.

So, why is the trophy still in Bahrain? Why didn’t Katie take it? Thomas and Katie did a little shopping while here, we sent home gifts for them and Thomas’s family. When they went to pack, they had to remove several things to be within the airline weight limit.

The trophy sits on my shelf now inspiring me for the next Christmas Day Pancake Cook Off. What kind of pancakes will I make?

2 thoughts on “Day 50 – The Isolation Journals”