legumes
January 1
Our family’s latest hope
For a prosperous
New Year
Moving forward
Black-eyed peas
Swollen and plump
But who wants to eat
those nasty beans?

rotary phone
“One ringy-dingy, two ringy-dingies,
Hello, have I reached the party
to whom I am speaking?”
Ernestine was the essence of
using the rotary dial phone.
At home it wasn’t that simple.
Only one could be
on the phone at a time.
To use it you had to come
front and center in the family
at the crossroads of the den,
dining room and
kitchen.
No privacy. 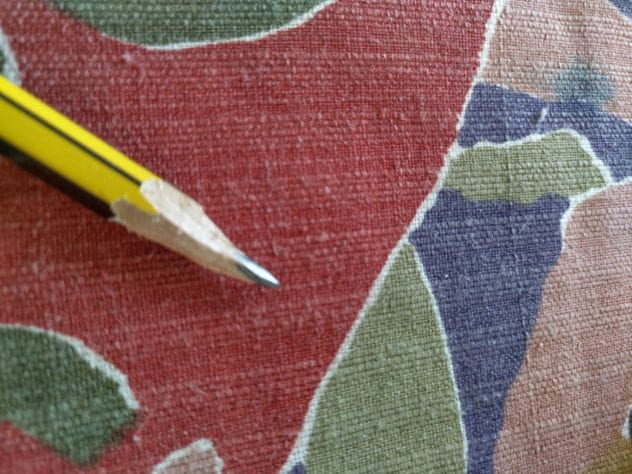 sharpened pencil
Grandma, why do you
sharpen your pencil
with a knife?
My crossword puzzles
I mean, why don’t you
get a pencil sharpener?
Now, why would I do that?

Today is Thursday, Day 121 in Bahrain’s stay-at-home time, day 86 of The Isolation Journals with Suleika Jaouad. Today’s prompt is by Jenny Boully. She gave a list of words of which we were to choose five. Then write about them using imagery and limiting the use of the word I. I limited the use of I, but I have to work on my imagery.

In the last month, the removal of many monuments to Robert E. Lee, Jefferson Davis, Christopher Columbus, Junipero Serra, and many more honoring confederate soldiers and women of the confederacy have been accelerated.

There are thousands more to go, and then we can worry about where to draw the line between who can be honored and which ones removed. Monuments and statues are created to honor those who are depicted, not to remember history. As John Oliver explained, when discussing Confederate symbols, we record history through books, museums, and Ken Burns’ mini series. He said, “Statues are how we glorify people.”

We need much more dismantling of damaging legacies. I hope we will get to a place where we can discuss them, but those conversations can’t happen just yet. Right now, let them come down.

Now, a harder dismantling needs to happen within each person. We have our own monuments inside, engraved with harmful and damaging legacies. We have made idols that we worship. Read Jared Yates Sexton’s Twitter thread below for evidence of some of the outrageous and damaging beliefs of white-identity evangelical fascism in the name of Christianity. Oh, God, save us from ourselves.

This is extremely important. People need to understand exactly the threat we're facing.

Let's talk about Donald Trump and the rising threat of white-identity evangelical fascism.

So we have issues to fix inside. I have my own personal harmful and damaging monuments hidden within me. I know they’re there. I am a sixty-something white woman who, after a rocky start, spent most of her life trying to be a “good” white person.  I was one of those ones who thought Obama’s election was a new chapter. It wasn’t until I saw the SNL sketch after trump was elected that it hit me. Chris Rock’s and Dave Chappelle’s characters were not surprised at all that trump was elected. The white people in the room were devastated. I finally had to admit that we were not the country I thought we had become. This was hundreds of years older than trump. How did it take me that long? It’s the blinding system of white supremacy that I and other white people with privilege have nurtured for 400+ years. The same system that Black people have fought against and endured for the same amount of time. It’s also my personal demons I’m blind too, and I know that I will continue to be convicted of my sin. Of that I am sure.

Me trying to be a good white person? What kind of molecule-in-the-bucket difference would that make? I’ve spent my life asking the wrong questions, centered on me. Now, I am listening, resisting injustice, disrupting racial bias, amplifying Black voices, studying history written by Black people, helping fund politicians who are committed to bringing justice, supporting Black lives and the Black Lives Matter movement. I am here to learn and have my personal monuments exposed and torn down.

Today is Wednesday, Day 120 in Bahrain’s stay-at-home time, day 85 of The Isolation Journals with Suleika Jaouad. Today’s prompt is from Sister Peace. Sister Peace asks us today: “What monuments do you carry inside you that are engraved with harmful beliefs or represent damaging legacies? What would it take to dismantle them? What could you put in their place that is loving, kind, joyful, and true?” I hope you will take 30 minutes to watch this interview with her.

Today was my last day of school, but we were asked not to come to school. There was a small team of admin and teacher who would greet the parent–just one from each family was allowed. Parents could pick up report cards and contents from the lockers and return school items like library books and sports uniforms.

It was hard for me to keep working on the paperwork that I still need to finish. I will have to do it eventually, but today I wasn’t getting it done.

At noon I got a phone call from my vice principal asking me to come to school for something, she didn’t explain what it was. “OK,” I said, “Can I have 30 minutes?”

“Sure, that’s fine,” she said. So I finished the document I was working on and walked to school. I sat in the office for a bit and visited with my sweet friend who is leaving the school next year. Then she was called into the principal’s office. I started figuring out what the “something” was that I was there for.

We missed out on our end-of-the-year party, where we would have had a wonderful meal and celebrated highlights together. We’d say goodbye to staff who are leaving and honor employees who have been there for 10, 20, 30, and more years. But that celebration was not to be.

When it was my turn I saw another friend who was holding a gift for her ten years at the school. I went to the principal’s office and they told me thank you for everything I have done for the school. They said nice things.

It was a sad reminder to me that I didn’t sign my contract for the next school year. My husband’s visa is due to expire in December, so we will retire and move back to California. However, because of Covid-19, who knows what will happen. I’ve told the administration I’ll be here volunteering for the first semester.

My principal said something like, “We know you’ll be here in the fall helping, or maybe filling in for the new teacher if she can’t get her visa, but anyway, we wanted to give you this gift.”  It was a tiny blue handbag. Hmmm.

We took a socially-distanced photo with the three of us–principal, vice principal and me all wearing our masks.

I definitely would have preferred the end-of-the-year party.

I guess this Slice of Life post and the photo we took are a way to document our history from this outrageous era.

Today I felt aimless and unmoored.

Today is Tuesday, Day 119 in Bahrain’s stay-at-home time, day 84 of The Isolation Journals with Suleika Jaouad. The prompt today is by Shantell Martin. She is a visual artist and today we are doing “creative-cross-training.” The prompt is to take out a pen, begin drawing and “follow the line and let it lead the way.” I watched Shantell’s TED Talk while I drew today. 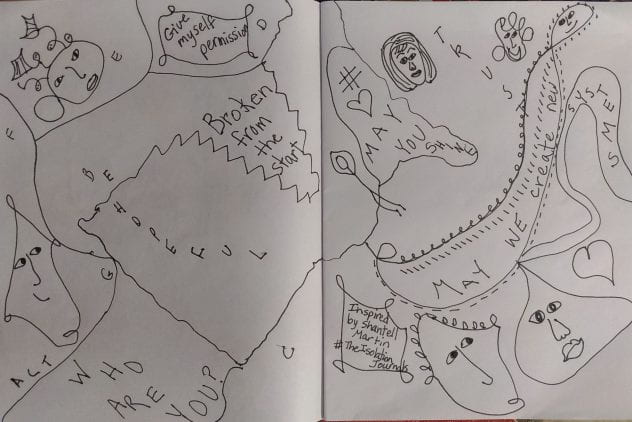