Sometimes with small steps we take, we have no intention of creating something bigger. We may just be stepping in to test out the water. This happened to me recently when I started using spices in the kitchen. It happened to me when I made a decision to say yes to teaching kindergarten  during a college summer, when my major was not education.

One of the things I thought about this week that started small and became something greater is my very first tweet inquiry about “genius hour.” Thanks to the fact that together we are smarter, #geniushour has grown a lot over the years. It was nine years ago that I saw a tweet by Angela Maiers about something called “genius hour.” I

LOVE This! We need to have a "genius hour" in school- for teachers and students! #authorspeak11

I want to hear more! RT @AngelaMaiers: LOVE This! We need to have a "genius hour" in school- for teachers and students! #authorspeak11

I did hear more and learned more. I started giving my students time for genius hour and sharing about it on Twitter. Thanks to my future friends, Hugh and Gallit, who were teaching partners at the time, we began to use the #geniushour hashtag, first just the three of us and gradually it has developed into a huge PLN.

Gallit had the idea to start a Twitter chat once a month, that has gone on continuously since March 2012. Hugh, Gallit and I, along with Joy Kirr were asked to be interviewed about Genius Hour and write a Genius Hour Manifesto. We all wrote about Genius Hour extensively on our blogs and practiced this empowering learning with our students.  The next year Gallit and I wrote an e-book about Genius Hour, which didn’t actually get published because of changes at the publisher. In 2015 it was picked up by Middle Web and Routledge Eye on Education and became published as The Genius Hour Guidebook. The second edition was released in 2020. 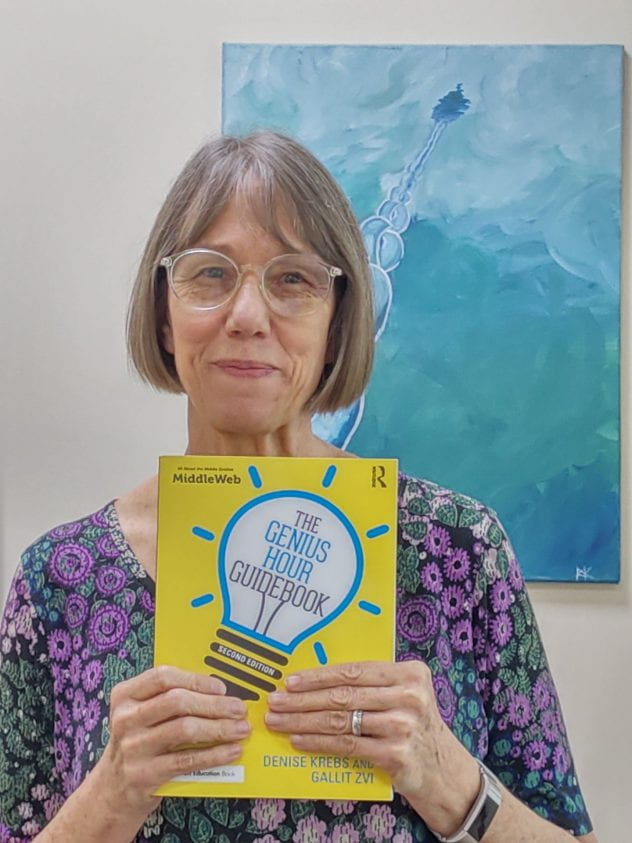 This past spring we had a chance to talk about the importance of Genius Hour in at home learning.

When I started doing Genius Hour with our middle school students, I never would have imagined that it would become a thing that so many people are practicing with their students.

Today is Saturday, Day 172 in Bahrain’s Covid season, Prompt 104 from Suleika Jaouad’s The Isolation Journals. Today’s prompt from Prune Nourry is “Reflect on a time you took one small action that led to a much greater creation.” Watch a video about the cathartic sculpture Prune made during her fight with breast cancer.