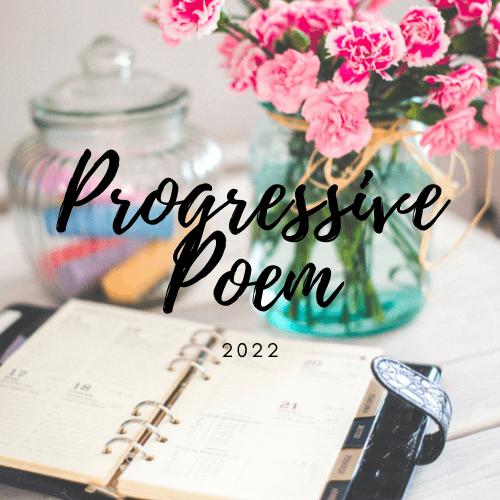 For the second year, I have the honor of participating in the Kidlit Progressive Poem, originated in 2012 by Irene Latham, and organized since 2020 by Margaret Simon. I’ve been editing this post to add the next line of the poem as it is being built line by line, poet by poet.

Today, April 14, I get to write the next line. I made a couplet joining Karin’s line with mine. My line is adapted from a line in Bridge to Terabithia. Over to you, Carol, at The Apples in My Orchard.

Where they were going, there were no maps.

“Sorry! I don’t want any adventures, thank you. Not today.”

“We have to go back. I forgot something.”

But it’s spring, and the world is puddle-wonderful, so we’ll whistle and dance and set off on our way.

“Come with me, and you’ll be in a land of pure imagination”

Wherever you go, take your hopes, pack your dreams, and never forget – it is on our journeys that discoveries are made.

And then it was time for singing.

Can you sing with all the voices of the mountain, paint with all the colors of the wind, freewheeling through an endless diamond sky?

Suddenly, they stopped and realized they weren’t the only ones singing.

Listen, a chattering of monkeys! Let’s smell the dawn and taste the moonlight, we’ll watch it all spread out before us.

The moon is slicing through the sky. We whisper to the tree, tap on the trunk, imagine it feeling our sound.

Clouds of blue-winged swallows, rain from up the mountains,

Green growing all around, and the cool splash of the fountain.

“If you look the right way, you can see that the whole world is a garden.”

a bright, secret, quiet place, and rather sad; and they stepped out into the middle of it.
Their minds’ libraries and lightning bugs led them on.

The darkwood sings, the elderhist blooms, the sky lightens; listen and you will find your way home.

The night sky would soon be painted, stars gleaming overhead, a beautiful wild curtain closing on the day.

Mud and dusk, nettles and sky – time to cycle home in the dark.

There are no wrong roads to anywhere

lift me like an olive branch and be my homeward dove.

Standing at the fence of the cottage,
I hear the new note in the voices of the birds.
I pray to the birds because I believe they will carry the message of my heart upward.
I make up a song that goes on singing all by itself
Surfing rivers of wind way up high . . . calling zeep, zeep, zeep in the sky.
blinking back the wee wonder of footprints, mouse holes, and underground maps.
It was all so wonderful and so magical that sometimes I got a little confused by my adventures.
I feel like waving…like dancing around on the road
But, “There is no hurry. We shall get there some day.”

The sources of the lines are:

1 Irene at Live Your Poem
2 Donna Smith at Mainely Write
3 Catherine Flynn at Reading to the Core
4 Mary Lee at A(nother) Year of Reading
5 Buffy at Buffy Silverman
6 Linda at A Word Edgewise
7 Kim Johnson at Common Threads
8 Rose Cappelli at Imagine the Possibilities
9 Carol Varsalona at Beyond Literacy Link
10 Linda Baie at Teacher Dance
11 Janet Fagel at Reflections on the Teche
12 Jone at Jone Rush MacCulloch
13 Karin Fisher-Golton at Still in Awe
14 Denise Krebs at Dare to Care
15 Carol Labuzzetta at The Apples in my Orchard
16 Heidi Mordhorst at My Juicy Little Universe
17 Ruth at There is no such thing as a God-forsaken Town
18 Patricia at Reverie
19 Christie at Wondering and Wandering
20 Robyn Hood Black at Life on the Deckle Edge
21 Kevin at Dog Trax
22 Margaret at Reflections on the Teche
23 Leigh Anne at A Day in the Life
24 Marcie Atkins
25 Marilyn Garcia
26 JoAnn Early Macken
27 Janice at Salt City Verse
28 Tabatha at The Opposite of Indifference
29 Karen Eastlund at Karen’s Got a Blog
30 Michelle Kogan Painting, Illustration, & Writing