Today’s Slice is brought to you by grade 5.

This morning I was told I needed to go on the field trip with one class of fifth graders. It was a last minute decision; I was one of two teachers going along with the 25 students, who were celebrating a contest win. Here are Sudha and I at Magic Island in the mall. 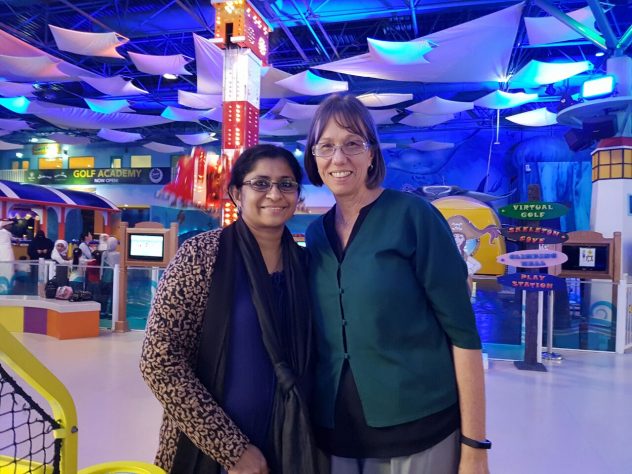 We had fun with wild and crazy running and playing. They had a two-hour pass that allowed them to play all the games, and they got their money’s worth.

When it came time for lunch, students were free to eat wherever they wanted in the food court. They had lots of choices. I wandered about the food court, too, open to eating anything. That is usually my M.O. I just order whatever looks good–Fillet of Fish, tacos, KFC, burger and fries, pizza, Diet Coke.

Surprise! Today, there was no junk food for me. Instead I chose fattoush (فتوش) salad with lettuce, tomato and cucumber (and crispy pita chips). I also had zucchini and cabbage leaves stuffed with a rice and tomato mixture. I had water to drink. And I enjoyed the whole meal! It was tasty, and it was real, unprocessed food.

What ideas have slipped into my head? I wondered.  I was free to eat a combo meal at one of my favorite fast food restaurants or even a Happy Meal, but I chose salad instead!

It’s unlike me, but I’m gradually changing. Since January, I have tried and often have made better choices–more fruits and vegetables, less processed foods. It’s paying off, and I feel healthier. I’ve also lost ten pounds, which is great, since my daughter is getting married in May.

Oh, yeah, and that ice cream cone from Jasmi’s for dessert was really small. 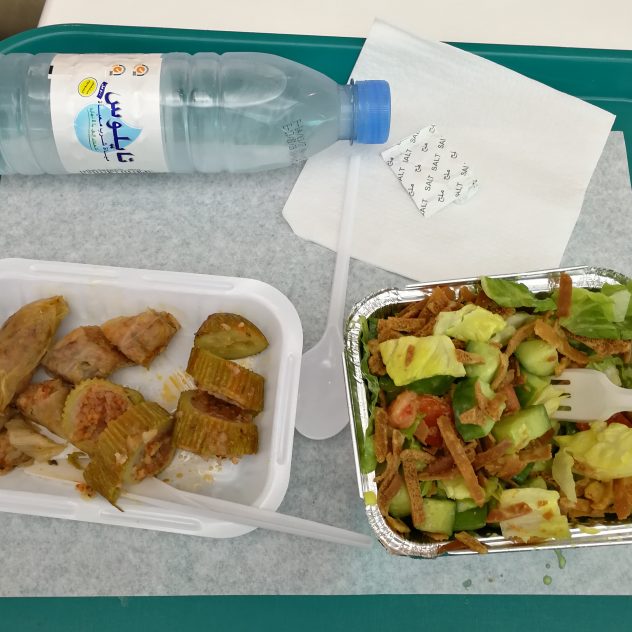