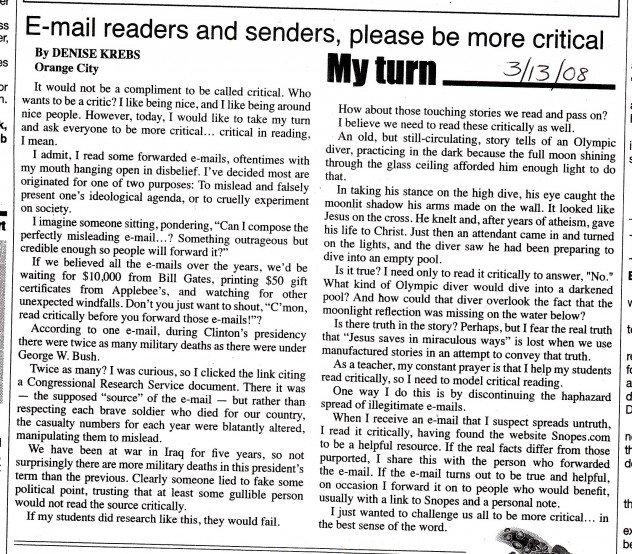 Almost a decade ago, when Twitter and Facebook were still toddlers, most of us shared stories not by posting links, but by sending a link, story or image in an email. Many of us remember those days. The subject line would read FWD:FWD:FWD: YOU GOT TO READ THIS!!!!! or some such title.

One day I wrote a letter to the editor of our local newspaper because sometimes one just has to do something when it is impossible to stomach reading another bogus email. The text is written below (and in the image above):

It would not be a compliment to be called critical. Who wants to be a critic? I like being nice, and I like being around nice people. However, today, I would like to take my turn and ask everyone to be more critical…critical in reading, I mean.

I admit, I read some forwarded e-mails, oftentimes with my mouth hanging open in disbelief. I’ve decided most are originated for one of two purposes: To mislead and falsely present one’s ideological agenda, or to cruelly experiment on society.

I imagine someone sitting, pondering, “Can I compose the perfectly misleading e-mail…? Something outrageous but credible enough so people will forward it?”

If we believed all the e-mails over the years, we’d be waiting for $10,000 from Bill Gates, printing $50 gift certificates from Applebee’s, and watching for other unexpected windfalls. Don’t you just want to shout, “C’mon, read critically before you forward those emails!”?

According to one e-mail, during Clinton’s presidency there were twice as many military deaths as there were during George W. Bush’s.

Twice as many?  I was curious, so I clicked the link citing a Congressional Research Service document. There it was—the supposed “source” of the e-mail—but rather than respecting each brave soldier who died for our country, the casualty numbers for each were blatantly altered, manipulating them to mislead.

We have been at war in Iraq for five years, so not surprisingly there are more military deaths in this president’s term than the previous. Clearly someone lied to fake some political point, trusting that at least some gullible person would not read the source critically.

If my students did research like this, they would fail.

How about those touching stories we read and pass on?

I believe we need to read these critically, as well.

An old, but still-circulating, story tells of an Olympic diver, practicing in the dark because the full moon shining through the glass ceiling afforded him enough light to do that.

In taking his stance on the high dive, his eye caught the moonlit shadow his arms made on the wall. It looked like Jesus on the cross. He knelt and, after years of atheism, gave his life to Christ. Just then an attendant came in and turned on the lights, and the diver saw that he had been preparing to dive into an empty pool.

Is it true? I need only to read it critically to answer, “No.” What kind of Olympic diver would dive into a darkened pool? And how could that diver overlook the fact that the moonlight reflection was missing on the water below?

Is there truth in the story? Perhaps, but I fear the real truth that “Jesus saves in miraculous ways” is lost when we use manufactured stories in an attempt to convey that truth.

As a teacher, my constant prayer is that I help my students read critically, so I need to model critical reading.

One way I do this is by discontinuing the haphazard spread of illegitimate e-mails.

When I receive an e-mail that I suspect spreads untruth, I read it critically, having found the website Snopes.com to be a helpful resource. If the real facts differ from those purported, I share this with the person who forwarded the e-mail. If the e-mail turns out to be true and helpful, on occasion, I forward it on to people who would benefit, usually with a link to Snopes and a personal note.

I just wanted to challenge us all to be more critical…in the best sense of the word.

Now, I still believe everything I wrote almost a decade ago, but things have gotten more complicated, haven’t they? Social media has amplified the crazy “share” mentality a thousandfold.  (Snopes is still an awesome source, and they are busier than ever!)

I teach fifth graders now, and we work hard on reading comprehension strategies including questioning and clarifying. Why, when it comes to social media, do some seemingly-educated people lose their way?

This week we have heard more troubling news. In light of the fake news that permeated this election day, Facebook and Google are being called on to censor fake news on their sites, to eliminate ad revenue that these viral stories generate.

Hmmm…Interesting. Do we need Facebook, Google and others to determine what’s fake and not fake? Are we willing to admit defeat when it comes to critical thinking and let a corporation do it all for us? Or should we not take responsibility for reading news with a grain of salt?

Stephen Colbert shares some of the outrageous stories that were shared on and around election day.

Today, it seems there is another motive for creating crazy fake news–people are getting rich. Do we need to have Google and Facebook stop them?

For those readers who make the stories go viral, those people who share without reading critically, why do they do it? Eight years ago I thought there were two possibilities for originating fake stories: To mislead and falsely present one’s ideological agenda or to cruelly experiment on society. I guess the same is true for those “share”-happy clickers who fail to check the sources.

If we’re not willing to think critically, maybe we deserve what we’re getting.

What do you think? Do we need social media outlets to police fake news? What responsibility do social media readers have?

Updated with more resources on this topic: