Wow, who would have thought that I would go back to 2011–to one of my first blog posts–and update it today, almost 8 years later?

Yesterday’s ‘assignment’ for the #Blogging28 Challenge was to update an old post, something I had not really tried previously. I looked at a few posts and couldn’t think which to do, so I skipped that day’s work.

Today, when going to leave a comment on Tiziana’s blog (today’s task), her post reminded me about the summer of 2011 when I met people like Sandy Millin, Chiew Pang, and Fiona Mauchline. I went back to this post.

If you read in the comments, you can see the quick answers I received to my questions. Chiew was right; it was easy to join in the #eltpics helpful and welcoming group.

I joined the #eltpics community for a few years, even when I wasn’t an ELT teacher, contributing and benefiting from the amazing pictures shared by others from around the world. Then I changed positions, got too busy, and lost touch. Now, I find myself in a position where I have learned so much more about English language teaching. I’m teaching 50 grade 5 students and one adult learner. I’m also studying for a TESOL certificate. I find I need people and their amazing expertise. Reading Tiziana’s post and reconnecting with this one brought up two new questions for me:

All these images were taken by @mk_elt and shared on #eltpics.

The more I learn about being part of the 21st century digital world we live in, the more I firmly believe it is about creating, contributing, connecting, collaborating and curating. It is so fun to learn something new and to join with others who are doing and sharing these things, as well.

This morning I learned about a resource that dedicated ELT educators are contributing to the world! Thanks to others who were willing to join the conversation, those of us involved in the June, July and August Project (Twitter hashtag #JJAProject) learned about eltpics today. I had never heard of the eltpics Flickr Photostream for teachers until I saw these tweets come by this morning: 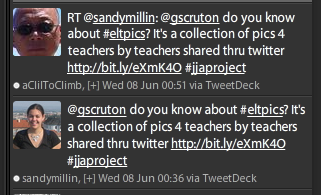 Thank you to Sandy and Chiew for telling us about the wonderful photos available for educational use from eltpics.

I created the image at the top of this post with photos in a set called “Things Shaped Like Letters” by eltpics shared on Flickr with a Creative Commons BY-NC-2.0 License. I used Big Huge Labs Mosaic Maker to put them all together to spell my name with these lovely organic images. Can you read it?

I’d like to learn how to contribute my own educational photos to the eltpics.

Can anyone help me get started?

5 thoughts on “Thanks, eltpics!”