A friend who has joined the Young Writer’s Program of NaNoWriMo asked me a good question: How do students make their goals for writing a novel in November? 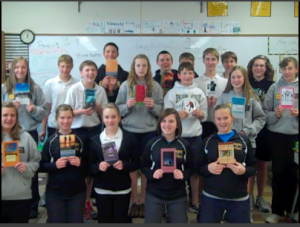 I have some history here that will help. The first year I wrote novels with my students. I asked for volunteers. Eleven out of 18 students chose to write novels. I ran two different programs in English class. The other seven wrote an autobiography and a fiction story. For the non-novelers, I used the same writer’s workshop style I usually do.

The novelists, on the other hand, had much more freedom. For the month of November, their primary objective was to draft their first novel. It worked well, and each 8th grade novelist succeeded in writing a 10,000 word or more novel. 100% success rate. The students who wanted to could edit and ready their novels for publication on their own, and I helped six students get them done and ordered.

The second year I added novel-writing to my curriculum. Again, the objective was to write the first draft, reaching their word count goal. Each student wrote a novel, and on some level everyone enjoyed it and remained engaged in their stories for the whole month.

Due to the success my students had the first year, I kept the 10,000 word goal as a minimum. That was a mistake. I had a few kids who just could not do it. Of my 21 students, five did not reach their goal. Thus, they did not “win.” It was sad because it was not for lack of effort. After November starts, it is too late to change the goals that have been set. However, 3 of the 5 who didn’t reach their goal still completed their editing work and received their printed book. Create Space (a subsidiary of Amazon) has been printing a free proof copy for each person who wins NaNoWriMo. (For those who didn’t “win”, we just paid the $8 or so.) To the individuals, I also tried to make it clear that they were winners, and I had made a mistake when I insisted that the whole class should have the same goal. 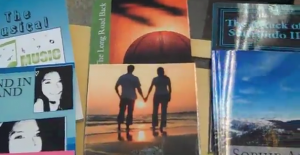 I am taking the advice of the YWP this year when they suggest to the students: “Remember to set your own challenging, yet reachable, word-count goal!” I am still challenging most of my students for 10,000+ words, but they can make their goal anywhere between 3,000-10,000+. I have one student who made hers 20,000. You will know who you can push over 10,000 and who needs to be 3,000 to 5,000. I chose these numbers based on the word count recommendations from NaNoWriMo. (I’m not sure when I discovered this document–but, unfortunately, I didn’t pay attention to it until this year!)

I found it was possible for many kids to have a 500-word day, and if they write every day in November during class, that will translate to around 10,000 words. Many students will write at home too. I even had one who liked to write in pencil on legal pads. She wrote furiously at home each night and then typed it up during our class period. Students find their own way and enjoy the independence. It is a writing experience most of them have never had.

This will be my third time participating in NaNoWriMo. According to Chris Baty, founder of NaNoWriMo, it is “a high-velocity approach to noveling” and “a seat-of-your-pants literacy adventure.” All participants at times have to write random craziness. The goal of 50,000 for adult writers is hard to do for busy teachers. I have a feeling that, for students, 10,000 words feels to them like 50,000 does to me. They experienced the same joyful rewards that I did when we reached our goals. Chris also suggests that it is “monkey barrels of fun” or it should be. 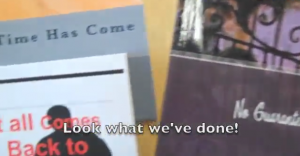 Someone came into class yesterday when we were working on getting ready for NaNo and said, “I was talking to some freshmen, and they said they just wrote random stuff to reach their goal.”

Yes, I told her, sometimes I did, as well. I went on to explain what that meant. That it really is true that the act of fluent writing is our major goal. In Chris Baty’s book, No Plot? No Problem, he suggests we must write quantity over quality for this month and worry about the editing later. Most all WriMos are guilty of shameless word padding at one time or another. On rare occasions during November, I would write a passage so poignant that I wept over it, but most of the time I was as dry as burnt toast, putting myself to sleep and risking dropping my laptop off my lap. I told the student she will learn about writing and about herself by going through the process. Yes, I explained, I will not be able to read all of your novel carefully, so you could get away with a lot of shenanigans. If that is your goal–to get away with cheating on your word count–you can certainly do that. To be sure, some students are rightly more proud of their novels than others.

Each WriMo lives his or her own experience, and as teacher you have to allow them the agency to find their way in the noveling world. That’s why this year, by allowing a variety of goals, I am convinced it will make students more committed to the process of reaching their goal. And, as a result, I believe a greater number will be pleased with the end products of their labor.

Link to the same video above: Nano Published Novels 2010-11

6 thoughts on “NaNoWriMo YWP – How Do Students Make Their Goals?”