A Moment of Humanity in the Classroom – Think about a moment in your teaching experience where there was a “connection” between you and a student or group of students that resonated beyond content.

The one moment that stood out is when a group of students happened upon a video about Kony and the Lord’s Resistance Army. It was during my first year of becoming the chief learner in my classroom. We had made a huge switch in how we did school in eighth grade history and language arts classes.

We were becoming co-learners on a mission to improve the world. 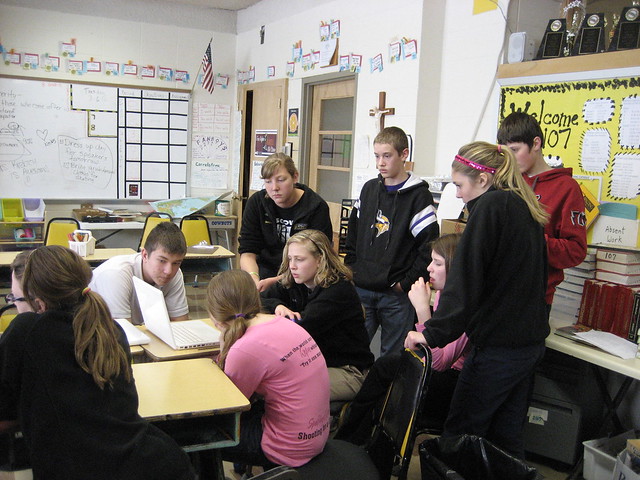 Here’s the caption I wrote on this picture on Flickr.

Four students started out watching this video while others were busy on something else. Others were pulled in to the experience. I loved the intense look on their faces.

This morning 52 million people had viewed this video, and a few hours later, it was up to 56 million.
youtu.be/Y4MnpzG5Sqc

They left the room wanting to do more.

I didn’t know what to do or how to do it. It was outside my level of expertise. I had never been trained for this. However, although I was clearly out of my league, when I gave up control and became a co-learner, we were all able to learn amazing things together. This was one of many times of rich connecting and learning that we did during that school year.

Update: Now over a million people have seen Invisible Children’s video and thanks in small part to the great awareness this “Kony 2012” video brought about, things have gotten better in Uganda. Read an update on Christianity Today about Kony and the LRA.