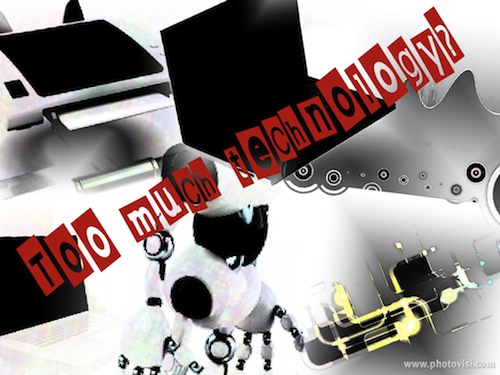 Am I overdoing it?

Today was our second day of introduction on a wiki on which we will share our American history learning. Hmmm…I expected jubilant excitement from my group of eighth grade geniuses, who are always game for more. These are the students who are earning hundreds of dollars for the American Cancer Society (actually over a thousand is a more realistic estimate before we finish). They are in the middle of writing novels in November. They planned and carried out a beautiful Veterans Day program today. They have learning attitudes that are second to none I’ve ever encountered.

However, today I had a bit of attitude from a few of them. “Why do we join so many websites?” was their cry.

“What? We don’t join that many, do we?” I said that, but I was really thinking to myself, ‘Good question, why do I join so many websites?’

I breathed a sigh of relief. I knew it. I am the one with too many websites, not them. “That’s perfect!” I said. “When you fill out a job or college application, you’ll be able to say you are proficient in using blogging and wiki platforms and Google apps. That’s awesome! Those are just basics that are very common for the 21st century. Everyone should know how to do those things. And furthermore, I want you to be a leader in the global community. I want you to have a powerful, safe, and positive digital footprint.”

At this point I was talking to the reluctant small group and most of the others were checking out the FAQs about Wikis, which were questions they had written on 3×5 cards the day before, and the RAFT suggestions, and I could see some ideas forming. 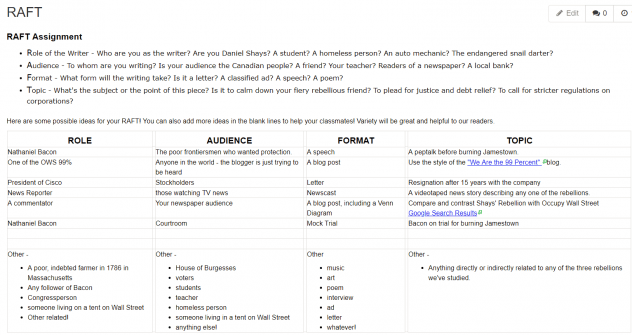 However, these two or three continued. “I don’t get it, though.” “I’ve never done a wiki.” “How will I contribute?” “We should be outside playing, not always using the computers!” (Interesting, I thought. We aren’t even a 1:1 school yet.)

I quickly showed the class how to make a new page on the wiki and how to edit existing pages. Some were starting to catch a vision, but at this point, the class period was quickly winding down. I had expected this enlightened group to catch on much more by this late in the period.

My small group of whiners persisted, so I said I would add a page on the wiki just for them to edit.

Others could join the whining party if they wanted to (OR, as they were billing it, a rebellion, which is what we have been studying), OR the others could contribute their history learning to the wiki. It was their choice.

On the wiki there was a little activity in various places, and then the bell rang.

I can’t wait until tomorrow to see what happens. And I’ll be sure to share their progress next week, but for now, I can’t help but wonder:

Am I really asking my students to do too much technology?

What is too much technology?

2 thoughts on “Too Much Technology?”