Today I really felt the effect on my brain when using texting to communicate in our fast-paced world. I fear my mind is deteriorating! Or at least giving me new opportunities for problem solving. 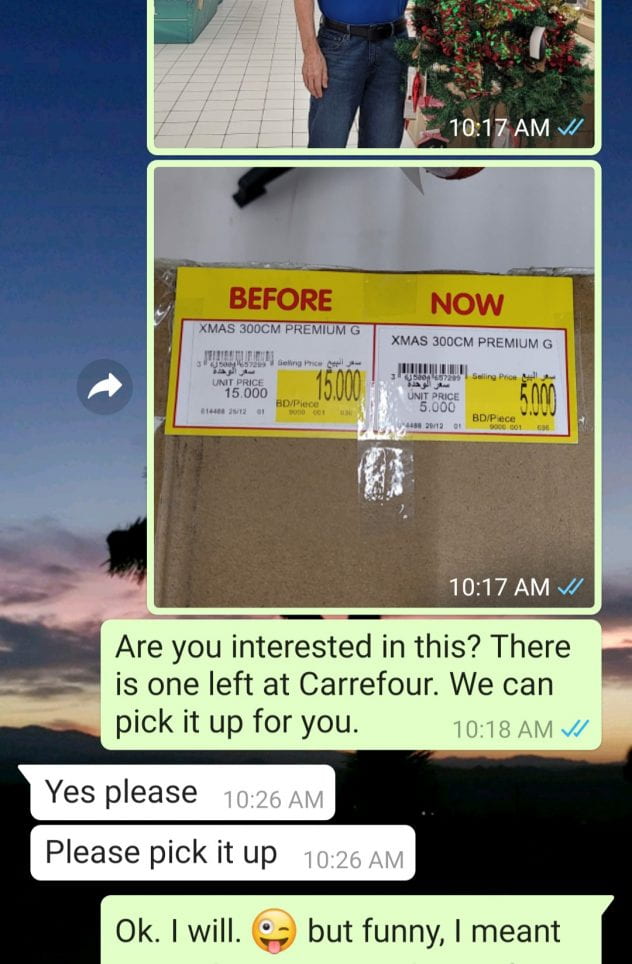 First I went back to the Christmas decoration section and put this giant tree into an empty cart. Then I felt I had to send a bit of an explanation as to why I texted this random contact to ask if he wanted me to buy him a Christmas tree. (This is not the first time I have texted the wrong group or individual.) 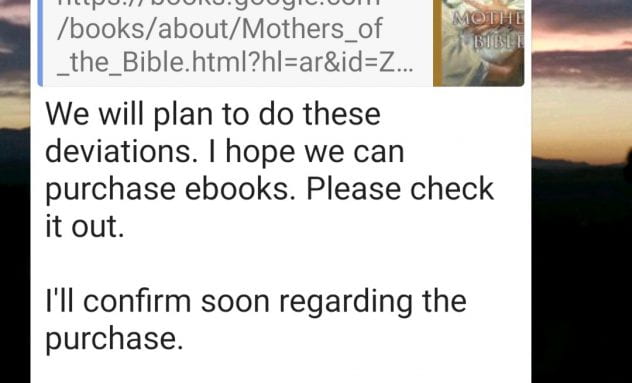 Next, I read the text above from another person. I have learned to read auto-correct spelling now, so I assume we will use this book for devotions rather than deviations. 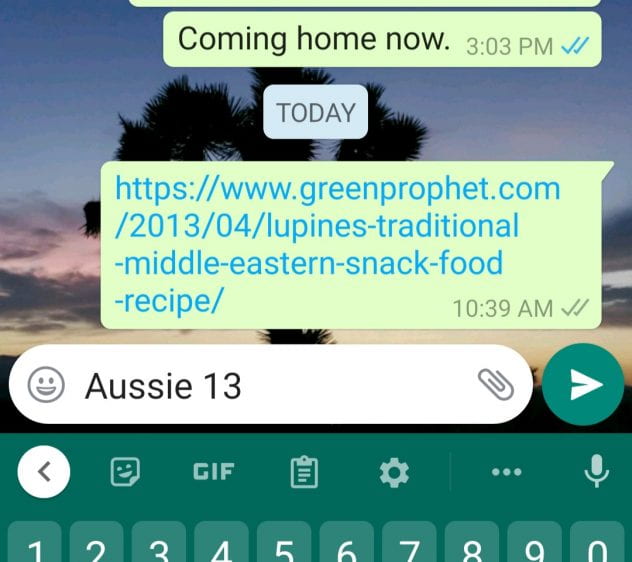 Finally, I was writing to tell my husband I joined the queue at Aisle 13 with my Christmas tree. Before I sent the Aussie text, I noticed it, took a breath and laughed.

Overall, though, I am still grateful for the ability to communicate in this strange way.

Gratitude, connection, creation, and change. These are in my future for 2021, at least that’s what I heard from Instagram. I like those words, actually, and perhaps they will spark an idea for my one little word for 2021.

Today I’m grateful. Yesterday I was eating a piece of white bread toast, not that toasty. I took a bite and bit on something very hard. I spit it out, wondering what in the heck happened.

My husband took it and determined it was  a fingernail. I thought I would never look the same at my favorite grocer with freshly baked bread. I threw away the rest of the toast.

Then I went into the other room, and quickly came running back to tell my husband, “It was my tooth!” I had run my tongue along a part of my mouth and realized my crown had broken.

Then I walked over to the dentist, in the next building. I went right in to see the doctor. He assessed the situation, and made an appointment for 3:15, a few hours later.

So, today, I’m grateful for my teeth and the dentist who was available and fixed my crown, helping keep me healthy. 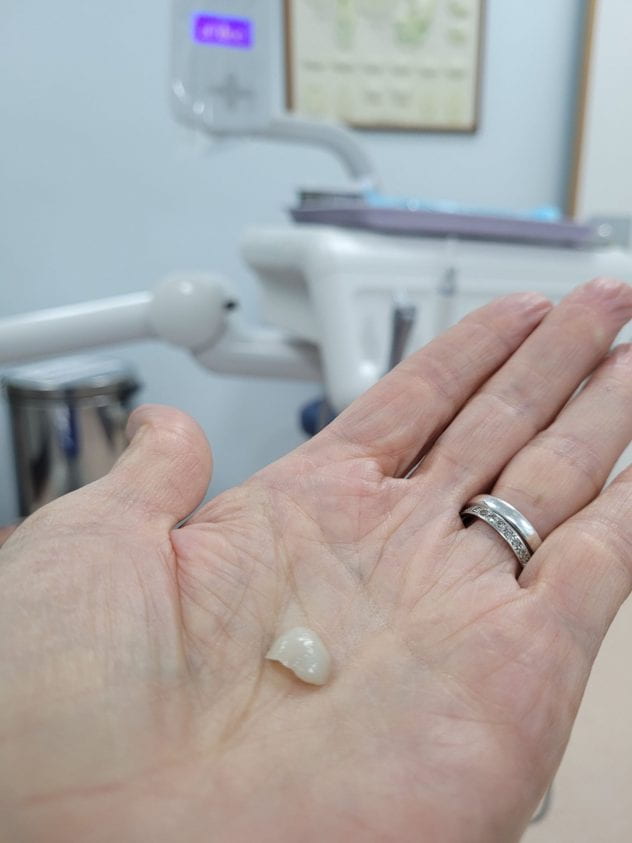 I had maps on my mind all day. Challenged by a prompt by Glenda Funk at Ethical ELA about mapping our voices, I couldn’t get any ideas. I love maps, literally and metaphorically. So I’ve thought of maps all day, but I didn’t write anything.

Before I went to sleep, I had a spark of an idea. I jotted a note about all the moves we’ve made as a pastor’s family. Maybe that’s what I’ll map, I thought. The moves have made for interesting cultural experiences, but they were not great for the stability of family and friends. I wanted to somehow capture these moves, but I needed to go to sleep after a long day.

Then at 1:57 a.m. I woke up thinking of maps again. I jotted some notes on the notebook on my nightstand. Then after another 15 minutes of lying there, I got out of bed and came to write in the dark without my glasses. I used Ctrl+ and relied on the red underlinings for my misspelled words.

Now it’s just about 4:00 a.m. and I decided to write this Slice of Life too, which I had also neglected yesterday. So, although it is officially Wednesday here, I’ll post this before I go back to bed!

Here is a link to this month’s Ethical ELA poems I’ve written, including the early morning “poem” I wrote about mapping my daughter’s moves.

Are you ready for Karak tea?
My husband’s gift to pour–
Friday mornings, quietly free
This chai, my drink du jour

Rejoice, rejoice–God with us, here
In this place, in becoming–
Sipping sweet, spicy, milky Tea
Pause and smile. He’s coming.

The Isolation Journals with Suleika Jaouad Prompt #120 by Cat Miles.

Write about a beloved drink—about how you make it, a memory associated with it, or the way it connects you to others or yourself.

I combined this with another prompt about using Emily Dickinson’s techniques. I attempted #1, writing about a mundane subject with a bigger idea, and #2, using common meter and rhyme. It was also easy to throw in techniques #3, capitalized nouns, and #4, use of dashes. I think I’ll keep practicing! Especially on #2.

Saturday, 12 December
A Gift with Jennifer Guyor-Jowett
This found poem is a collection of first lines by Emily Dickinson.

I see thee clearer for the Grave
The feet of people walking home
Trudging to Eden–looking backward
Heaven–is what I cannot reach!

There is a Word
As subtle as tomorrow–
Oh, what a grace is this–
That Love is all there is

Who has not found the Heaven below
I shall keep singing

Spirit of ’76 Grad and first time voter–
With a month to spare, I was
Eligible to vote in my first presidential election
I registered as an independent

Jimmy Carter earned my vote
That was an easy choice even for
a teen who cared more about getting a date with
Rick than about politics
But I did notice Watergate and a pardon,
Gerald Ford didn’t stand a chance, I thought

I continued through the years as an independent–
always looking at the two candidates
voting at times for Republicans,
other times for Democrats

When Obama was running in 2008, though–
Yes, we can! Hope! I was enthralled.
I went out and changed my 30-year independent
status to Democrat, so I could caucus for
Obama in Iowa.

After the caucus, I went straight back
to being Independent.
I always thought there was strength in
independence,
I was proud to be discerning, diplomatic Denise
I saw both sides. I was a good listener
and autonomous thinker.
Presidential elections are personal,
aren’t they? I didn’t want the party to decide.
I wanted to decide for myself.

When trump came down the garish escalator
in 2015 and spoke of Mexicans the way he did,
I couldn’t believe he didn’t get ostracized and
chased away from the process.
Republicans ate it up
and he ate up their souls
Somewhere during that primary season,
I became a
Democrat for good.

The Holy Bible,
MAGA Version, 2020,
Adulterated–
A Bible chock-full of capsized values for:

The MAGA version follows
in a long line of
bastardized translations–

Her first move, she was just over one year old. She had no idea on that drive from Iowa to Michigan that her dad had added an extra three-hours to the all-night journey when he followed the road signs to Council Bluffs instead of Dubuque after dinner in Des Moines. She slept peacefully through it all in the car seat. When she woke up, the box of tissue entertained her throughout the early morning traffic in Chicago. She tossed each Kleenex whimsically throughout the backseat for an early snowfall while Dad took his turn sleeping on the camping mattress in the back of the pickup.

Four years later we did it again. Busy selling our winter gear at the thousand-dollar yard sale, we prepared to leave Michigan for Phoenix. She looked up and saw her big yellow school bus neglectfully leaving her behind. Marcus later told her he was afraid she was sick. “Mom, there goes the bus!” We raced into the house and got ready, driving to afternoon kindergarten. I stood outside Mrs. Bigler’s classroom and cried like a baby as I explained why we were late. This experienced kindergarten teacher tried to cheer the young mother, “Don’t worry. It’s only October. She will forget about us and just have memories of her new class.” What? That offered no comfort.

A few days later, she and I were sitting in the bathroom. She sobbing and me trying to find a quiet place to console her where we wouldn’t wake the household of new friends who were accommodating us until our house was ready. At home, on this Saturday morning, the sun was shining and the pancakes would have been on the griddle, but in this new time zone, it was an unearthly hour for crying. She wrote me a note with a blue crayon, “Keep Marcus.” I joined her in sobbing.

And then we moved again. This time after she finished her freshman year in high school of all indefensible decisions. My husband tells people she never forgave us for that move. But she did, at least outwardly, formally. We took her from Arizona back to Iowa, the town of her birth. The girl, who later became her best high school friend, at one time was a baby she had seen-not-seen at the doctor’s office when both of their mom’s held each other’s hands as they waited their turn to have their two-month-olds inoculated. Fifteen years after the shots, she did fine in her new high school. She joined cross country, drama, speech, quiz bowl, debate. She took AP classes and had some great experiences. At least I try to convince myself she did.

Before too long it was time for college. She packed her bags and hardly looked back. Sailing club on Lake Michigan, knitting club, including late night practice sessions and chats in dorm rooms with new lifelong friends, service and volunteer work, excellent success in classes. I asked her that Christmas, “How are you doing it? You are rocking your first year of college!” My firstborn’s answer stung but didn’t surprise. “I left home three years ago.”

Wednesday
Before Picture with Chris Baron

No social distance to my lament
Seemed like a superspreader event

“There’s no COVID!” we labored to feign
Red and white! We celebrate Bahrain!

Flags, hats, sparkles for National Day
Couldn’t get out of everyone’s way

Then the show began, grateful we gazed
We left our fears–fleetingly unfazed 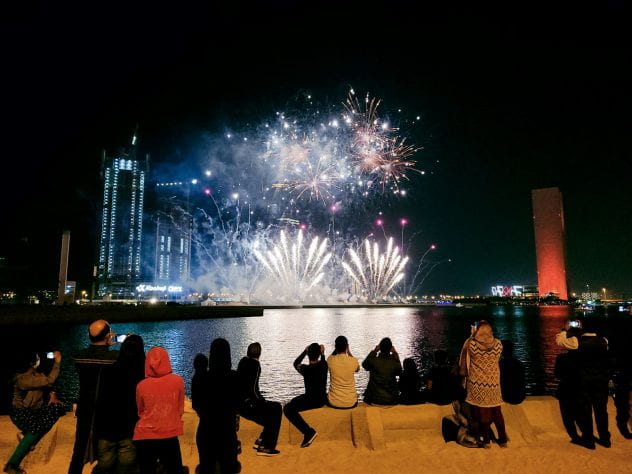