Today: I was purging and deleting from my blog post DRAFTS, dozens inadvertently abandoned over the years. I found something, though, that I stopped to read. It was last edited November 13, 2011, but I thought this one still deserves attention. Did we change anything in the form of grading in those last ten years? The importance of student voice has been emphasized more lately, but do grades continue to get in the way of our young people being able to fully use their voices?  The questions at the end are still apt today. Here is the post I wrote then:

November 2011: Another one of those “ah ha” moments occurred this week when I gave a writing assignment– a “This I Believe” essay.

I gave a mini lesson on VOICE–the ability to connect emotionally with the reader, to put one’s special mark on the writing. Papers with great voice will sound like the author really is.

We talked of ways to help their voice come out in this piece: speaking in the first person, telling a specific story that illustrates a belief they have, and keeping the writing in the present–not about dreams they believe will happen in the future.

We listened to lots of examples and got started writing. The only thing I would be grading on this assignment, I explained, was the writing trait of VOICE.

When I read the first drafts, I was amazed at the range of success in writing with voice in this assignment. Some were rich and personal, authentic and fresh. Others were banal and bland.

I know it’s not easy for any of us to open ourselves and share our beliefs, so I didn’t have great expectations for our first attempt. However, what surprised me is, in general, is that the best VOICE papers were by the students who don’t typically get the best grades. Are they more willing to take risks?

The opposite was true for the typically “A” students. Many of those who care most about doing well grade-wise were the ones who played it safe, struggling to express themselves with a personal story so they could convince the reader they really believed anything. Theirs were well-written and organized, with meticulous conventions, but so lacking in VOICE, passion, heart.

Just another reason why my heart breaks when we have to give grades.

Are we snuffing out the creativity of our students who feel a need to get it “right”?

How can we reach students who seem overly-enamored with getting A’s? 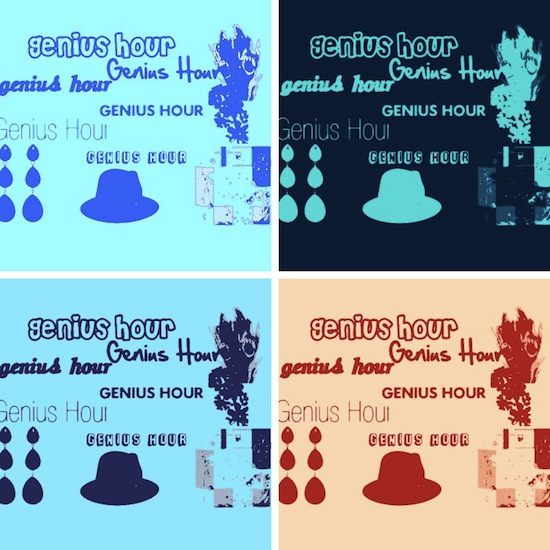 #Geniushour was last week. Students products are posted here. The following post has their answers to evaluation questions about their work during #geniushour.

NOTE on 12/6/2011 – The last student finally completed the evaluation, so I am updating the stats below with all the student data. I’m also using a new feature I just learned today–“Show Summary of Responses,” a feature on Google forms. Easy!)

Like Tia’s class is doing this week, we actually ended up with about 100 minutes of genius. When asked to evaluate the time frame, more than half the students thought there was not enough time. 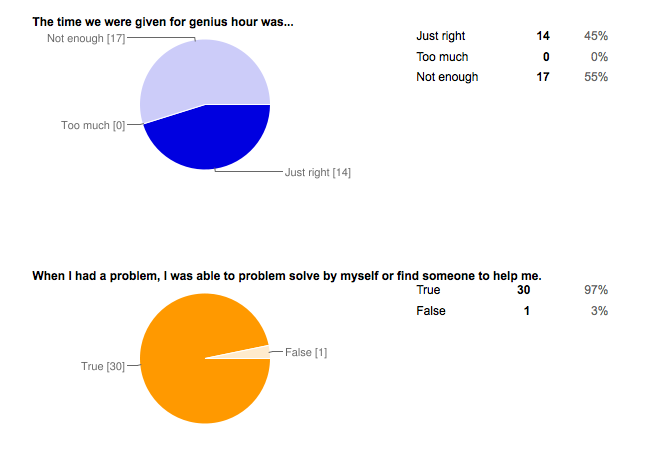 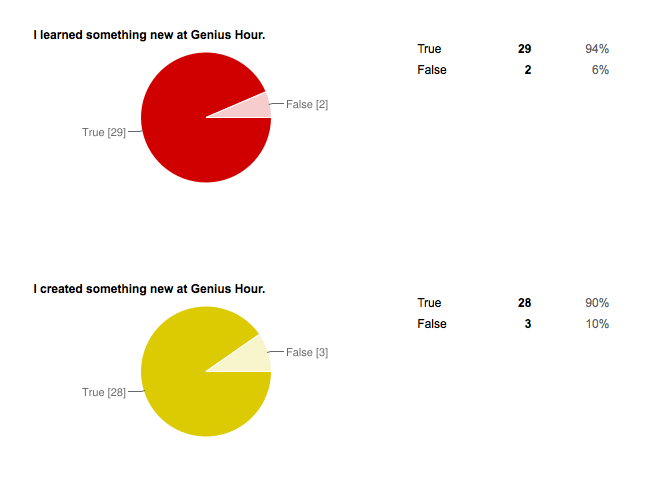 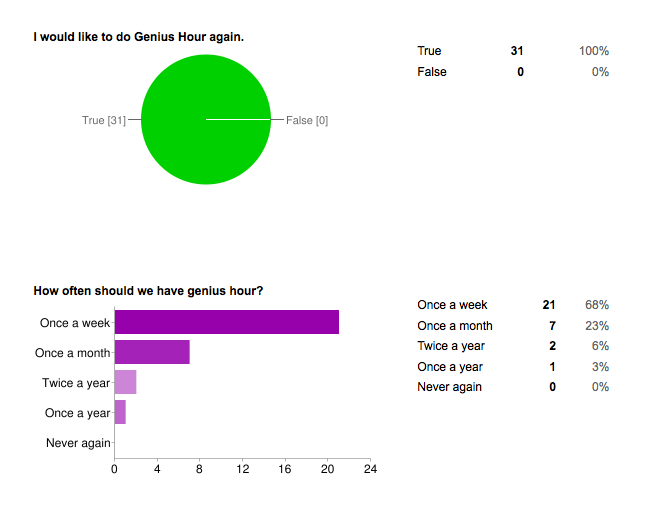 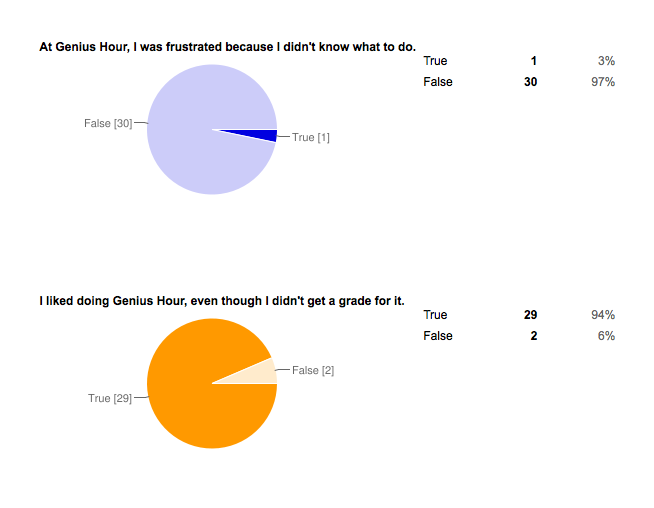 What I enjoyed most…

I hate grading! I wish that I could just learn in partnership with my students. I wish that we could connect and contribute in the global world of authentic learning, and that I would never again have to put a grade in the grade book. That’s my hope for an ideal world, and maybe a transformed educational system.

However, today, I still need to record grades. On some level, I must “grade” students’ participation in the Young Writer’s Program of National Novel Writing Month. Here is what I do for grading.

First of all, if I have a student who is having a hard time getting started or becoming engaged, I have numerous individual conferences with him. Once he gets going, then we are both happy.

Next, I have benchmarks that students meet. Each of these are graded, about one a week.

Finally, this year, because each student made a goal that I approved, I will also record a small grade based on whether they reach their goal. Remember, this has to be done lightly and not a major grade because really, you aren’t going to be able to know right away if they copied and re-pasted a couple thousand words into the center at the last minute. I would much rather they have an authentic noveling experience than just fake it to get a grade on an inflated assignment.

That’s about it. I record only four grades in the grade book for the month of November, and almost everyone gets a good grade.

Revising and editing is another topic, which proves a little harder. But that’s not for November.

Image by Sean and Lauren, shared with a CC By 2.0 Attribution License.