Oh, my goodness! I’m 0-2! This is my second loss to the tile floor this week. I don’t remember the last time there was broken glass in my house, but this week two slices of my life have included red liquid and broken glass! (First post here)

This morning I woke up and had an idea to enjoy a pedicure. I got my Epsom salts and hot water ready in the plastic wash tub. I brought along an emery board, nail polish and clippers. Oh, well, I thought, since I don’t have nail polish remover I no doubt can scrap off the old stuff because it’s got to be from last summer, or I’ll just go over it with a fresh coat.

I sat down at the tub. The water was still a little too hot, so I was tiptoeing in. It didn’t take long for my feet to get accustomed to the temperature, so I settled in and began to enjoy the soak. I reached for my tea latte, which my husband had brought me to enjoy while I pampered myself.

However, there was a different plan for my morning. When I reached for my tea, my elbow swept the fingernail polish off the table and onto the tile floor.

This was the first time in my life that I broke a bottle of fingernail polish. And, oh, yes, I remembered I didn’t have nail polish remover, so after I sent a text to my neighbor to see if she had some, I tried to mop up the globs with tissues.

I also poured and scrubbed with a half bottle of White Spirit, which may be a British kind of turpentine.  You needed a lot of elbow grease with that stuff and it mostly wasn’t coming off.

One of my first thoughts was of Maureen, who had a couple of posts this week, where she toyed with the idea of getting old because of a couple of things that happened to her. (Here and here) My follow up thought: “Am I getting old?” Or is it this tile floor that seems to have been hiding for eight years, and now is opening up a can of whoop-ass!

My neighbor responded to my earlier text and the nail polish remover definitely did its magic. I cleaned up the spill and got ready with a few minutes to spare before my first class at 7:45. 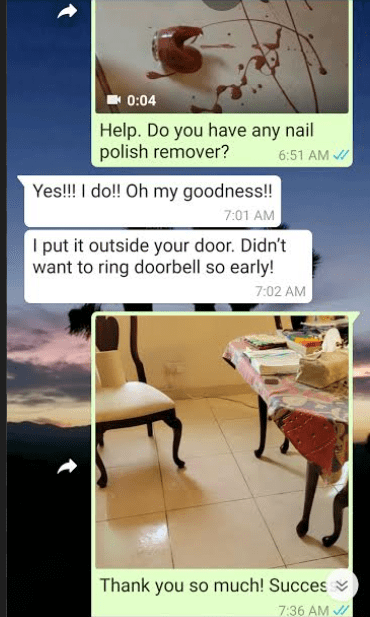 My word for 2021 is gratitude. This year I’m practicing! I’m on the lookout for things to be grateful for, especially those things that I will miss when I move back to the U.S. Today it is the salads I make.

Soak, wash, drain, chop, chop, dice, grate, grate, squeeze out extra water. Add each ingredient to my largest bowl. Slip my hands into the bowl and gently toss to mix together.

Cucumbers, zucchini, carrots, celery, cherry tomatoes, a slew of greens–this time, mint leaves, arugula, parsley, cilantro, and  purslane. My goal is always to have at least ten different items in the mix.

Then I put it in a plastic tub with an airtight lid, add several layers of paper toweling on top of the salad, turn the tub upside-down and store it in the refrigerator. If I change the papers and keep the salad as dry as possible, it will last for a week of salads for our family of two.

I will never think of a salad as lettuce and tomatoes again. Now salad is this colorful conglomeration with so many delicious flavors and delightful textures. 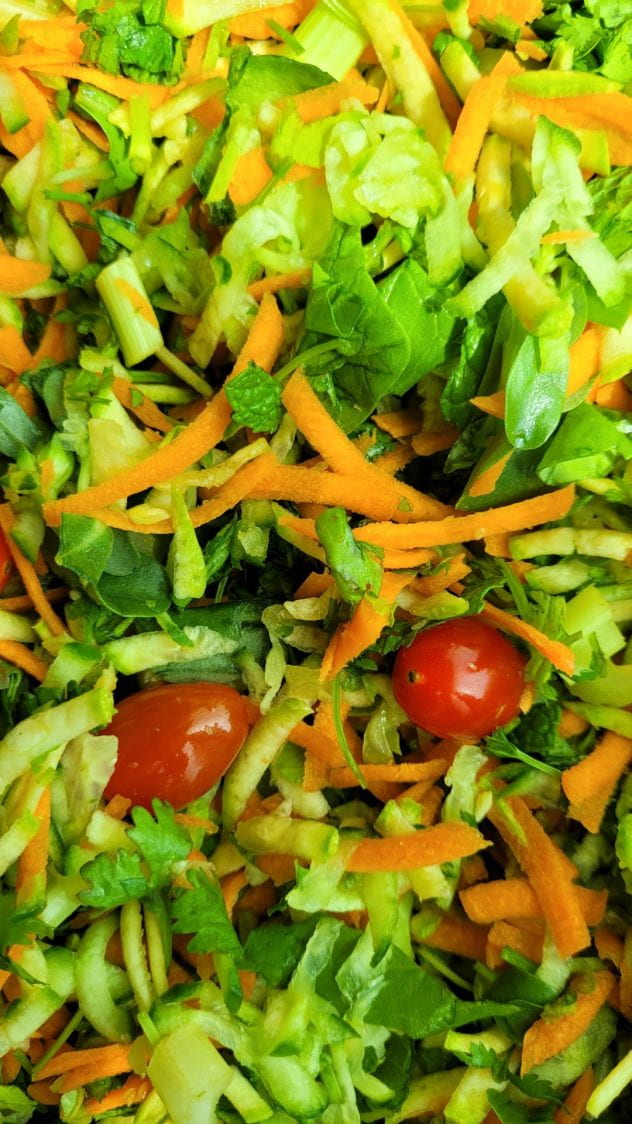 On Friday, Terje wrote about her dream of puffins and a conversation she had with her brain during the night. She wrote about it here on “Midnight Slice.” Terje had been inspired by Erika Victor and her post “In the Middle of the Night.”

Also on Friday, Kim Johnson wrote about her dream where she adopted a lioness. It includes an It’s a Small World-type ride. Read about it here at “Save the Lions!”

Since I read these three nighttime slices yesterday, I find myself again inspired by this community for my next post today. I guess I was inspired for my sleep, as well, because I had one of those nights, a three-pee night as Erika called it.

Then at 4:37 a.m. I was lying awake already when the Fajar call to prayer began, which is shorter than the afternoon prayer calls, which I captured a portion of today around noon.

I usually sleep through it, since my Christian prayer life is much less devout than my Muslim brothers’ and sisters’.

A few minutes later I heard part 2 of the morning call from one of the mosques–perhaps it’s a repeat of something like “hurry to the prayer” or “prayer is better than sleep.” Maybe a sleepyhead, thrown in too (but I doubt that last one). I’m not sure because, of course, it is all in Arabic.

Anyway, if I’m awake with the call to prayer, there is about a 50/50 chance I’ll go back to sleep. Today my lists won the day, and I started the day early.

I keep a pad of paper and a pencil on my nightstand. After the call to prayer and the fact that I had been lying awake quite a while, I wrote a few more things on the second page of my pad of paper. It’s dark as mud in my room because we have black poster board in the windows, so I have to remember where on the paper I’ve written throughout the night. Sometimes folds in the paper help me with placement.

When I started writing “important” things like iron and clean, I tried to have a conversation with my brain, like Terje did yesterday.

Me: OK, time for sleeping another hour or two.

Brain: You should write “Clean the refrigerator.”

Me: Are you kidding? If I don’t do that job for the rest of my life, all will be well. Let me go to sleep.

Brain: OK. Here is one for your list. You need to change your blog settings so Glenda doesn’t have to stay in moderation jail every day.

Brain: But maybe you will need to try another theme.

Brain: But what about that student who has missed two sociology classes? You need to email him right?

Me: Yes, I was supposed to do that.

My husband brought home two jars of sauce, a gift from a friend who thought we’d like them. They look like small jars of spaghetti sauce, only these are Indian-style masalas. One was called Rogan Josh.

“Well, I’m sure I know a Josh Rogan. Or maybe it’s Seth Rogen I’m thinking of.”

So I went online to look. Sure enough, Josh Rogin is a Global Opinions columnist for The Washington Post, and also kind of named after an Indian masala.

The jars went into our pantry. Then the other night when I was trying to finish dinner I went into the pantry to look for a can of mushrooms for our pizza. Sadly, when I went behind the jar to grab a can, (which ended up being bean sprouts instead of mushrooms), I knocked that Rogan Josh jar of sauce onto the floor. Smashed the bottom right off.

Oh, my, what a mess! Broken glass is one thing to clean up. Thick red sauce is another. Together, they are a disaster! How do you even go about cleaning up that mess?

I picked up the biggest piece of jar left with some sauce inside. I poured it in the toilet, while tracking the sauce down the hall. Then I swept up what was left and got the broom all covered with red sauce. I took the broom to the shower, tracking more sticky sauce down the hall and realized I quite possibly left glass chunks in the shower as well. Then I got the mop and a bucket of water. I pushed the small broken glass around the tiles a bit, but picked them up with my rubber flip flops when I stepped on them.

I got the vacuum cleaner out next and tried vacuuming up the wet glass particles. But who knows if I got them all. When my husband got home, I warned him not to go barefooted for a while.

In the meantime, while I cleaned, I noticed the Rogan Josh smelled really good, and I wondered if I would ever buy another jar of that sauce to try it.

I never found mushrooms, and I did not put those beansprouts on my pizza either.

Today is Countdown Day in places that date things in a way that makes sense–from smallest unit to largest–day, month, year. 4/3/21. A special day you’ve never heard of, I would imagine.

Theoretically and head-knowledge-wise, I can see it makes total sense to write the date like this. However, I grew up with month, day, year dates in the U.S., and so for decades I didn’t know there was another way to write the date. Nine times out of ten, automaticity ensures I still manage to write the date with the month first, even though I’m living in a country where the day comes first in the date.

I didn’t know it was Countdown Day until I saw it in a chat in one of my many–count them (I just did)–six Zoom meetings today! 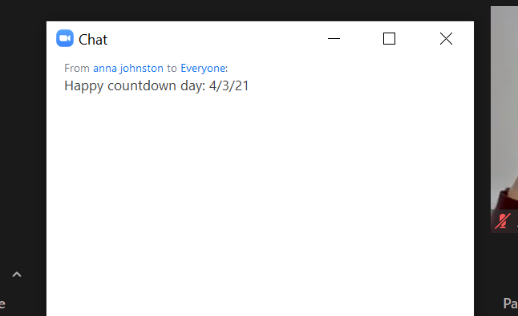 This came from a teacher from Down Under. Actually, I’ve learned since living in Bahrain that most of the world writes the date with the day first.

Imagine how confused I get when I have students write their birthdays on a candle for our birthday bulletin board. I see 7/5 or 5/7 and inevitably I have to ask, “Is your birthday in May or July?” The student does a double take between the candle and me and wonders why I don’t know my months. I love it when the day is anywhere between 13-31. Only then can I be confident I know for sure what month we are talking about.

Throw in the use of Google Sheets, where the default date format is from the U.S.–month, day, year–and our school reports can really get confusing.

The good thing about doing dates in both ways, though, is that we can “celebrate” Countdown Day twice this year. Once today and once on April 3rd in the U.S. Or is that, 3/4/21? Oh, dear!

Anyway, in honor of the Mars landing, let’s celebrate twice in 2021.