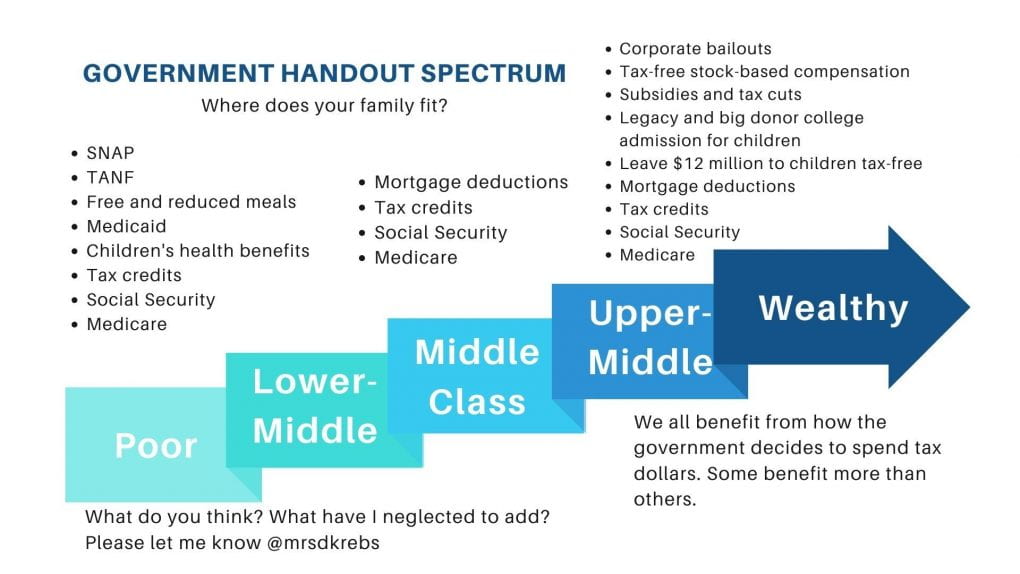 In the 1930’s America created a middle class. It was perhaps better than having only extreme wealth and extreme poverty, but it was created with white supremacy at the core. My family benefited from the G.I. Bill after WWII. My parents were able to buy a home. Then in the 70s, because of strong unions and a  good part-time job, I was able to “put myself through” a California State University, which was tuition-free then! My husband worked full time with his union job in a grocery store and put himself through a private college with no loans, even saving money for grad school while he did it.

Now, look at all the black veterans who came home from serving in WWII. Systemic racism kept them from taking advantage of the benefits of The Servicemen’s Readjustment Act of 1944. The same Act that allowed my family to buy a home in the suburbs. Though we were not wealthy, my husband and I came from home-owning families, admission to colleges, and other benefits of being white.

It is time to dig deep and pull out our roots of racism. There are reparations to make. We need to redistribute government aid that is being showered on the wealthy.

The Story of Being White in ‘Murica

There’s a story in this place.
A father came home from faraway war,
part of the Greatest Generation,
but broken into pieces.
His country helped him pick up those pieces,
cobbling them together with a home loan
and hope from his wife and twins

There’s a story in this place
Five more children came along
and grew up in an L.A. suburb
a stone’s throw,
but a universe away,
from the burning riots
in the redlines of Watts in ’65

There’s a story in this place
A story where all those kids
grew up, not wealthy, but they had
available healthcare,
safe water and air,
funded schools, food security,
safe contact with police
because they were white people
Black and brown people lived
in other neighborhoods.

All those kids grew up
and became home owners
and got jobs that could sustain a family
With scholarships, part time union jobs,
and free tuition–
some of the kids in that suburb
even graduated from university
and became professionals

There’s a story over there
A story of America built
on the backs and blood
of labor stolen
A story I closed my eyes to,
A story heard only
through sanitized textbooks
A continuing story I don’t know
A story of black colleges
bursting at their seams,
“white” colleges unavailable to them,
no room for all the GIs who wanted to go
It’s a story of black veterans
who fought for America
but couldn’t get a loan
A story of black neighborhoods redlined
A story of discrimination that persists today