After teaching grades 7 and 8 for seven years, it was a challenge for me to go down to Kindergarten. The first few months, the way was treacherous. Now looking back, after eight months or so, I can say overall it has been a delight, and I know it was a gift I didn’t even know I needed.

I find I can practice what I learned in my Master’s program; that is, teaching young children literacy. Most importantly, though, the children are “wonderful, marvelous, beautiful, magical, filled with curiosity and dreams.” (Lyrics by Debbie Clement) They are loving and open. They are learning sponges with big, growing brains.

But how can I do genius hour with them? I wondered. I loved the engaged ownership in junior highers when they were given a chance to learn what they wanted in what we call genius hour.

As Faige Meller has suggested, genius hour in kindergarten may look like a maker space. In this tweet, she says making is what kindergarteners do and, in fact, makers are who they are. (Be sure to read Krissy’s original post too.)

I believed in making, but I didn’t know much about Kindergarten. I had learned to trust Faige, though, so when I saw her tweet last March, I began to run with her ideas in Kindergarten. I began collecting supplies and asking families to do so, as well. We have quite a collection, and we go through a lot of materials.

When I learn something new about brain research, I share it with my Kindergarteners too. They are not too young, and even though I’m speaking a foreign language to them (they are native Arabic speakers), they understand enough. They know they are capable and creative, and as they create, they get smarter. And they know that as they learn two languages, they get bigger brains too! 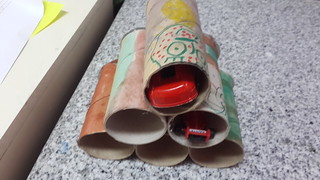 So, we are definitely still making our way (pun intended), but we’ve had some huge successes. After we made a small couch for our reading center as a group project, one boy took on the task of making a very small chair with the ten juice bottles we had recently accumulated. He needed lots of help, but that’s where I came in handy, helping to wrestle the juice bottles and operate the hot glue gun and packaging tape. He was the maker. I was the sous maker taking my orders from him. 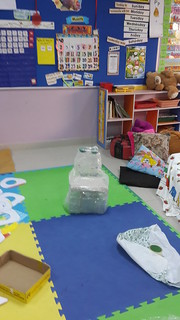 The little chair finished and ready for a cover.

Genius hour in Kindergarten. It’s happening. We are calling it that, we are making and learning, but I am always open to suggestions you might have for helping us do it better!

Please leave a link in the comments to your primary genius hour projects and process. Or share on Twitter with the hashtag #PrimaryGH. 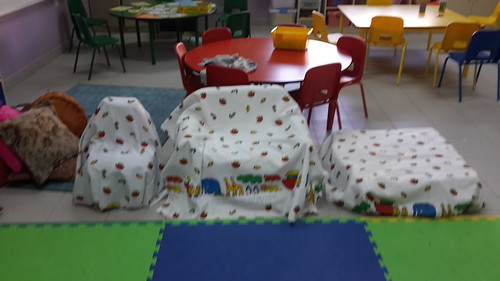 Our growing collection of maker furniture