My guess is there are more firsts in her distinguished career.

Shirley was known as “Fighting Shirley” for her work fighting for justice for women and poor people. About her childhood, Shirley said this:

“Mother always said that even when I was 3, I used to get the 6- and 7-year-old kids on the block and punch them and say, ‘Listen to me.'”

Shirley’s first career was as a teacher. She earned an MA in elementary education from Teachers College at Columbia University. She married twice but she did not have any children of her own, so today I wondered what would have happened if I could have had Shirley Chisholm in my home when I was a young girl. What if I could have spent my young years with her, listening to her wisdom, allowing her words to scrub my ears and brain of the propaganda I had absorbed about white and black people while I was living in Los Angeles County before the Civil Rights Act? But she didn’t come to my house.

When I was a young teen she went on to run for president. Her candidacy was an anomaly to me. I very occasionally caught sight of one of her campaign buttons or posters and remember wondering who could be so brave to do what she was doing, needing Secret Service details to protect her from multiple assassination attempts. At the same time, I also remember knowing she was going to lose and thinking why bother.

Instead, had I grown up with Shirley, I would have become a different person–one who undoubtedly would have gone out on the campaign trail with her, not thinking about losing, but going for it, better understanding the fight before us. In Shirley’s words:

“I ran because somebody had to do it first. In this country, everybody is supposed to be able to run for president, but that has never really been true.”

I hope I would have embraced her message and tried to fight for the “new era in American political history” of which Ms. Chisholm spoke.

Later in life, Shirley Chisholm said she didn’t want to be remembered as a candidate for president or her Congressional service, but instead she said this:

“I’d like them to say that Shirley Chisholm had guts. That’s how I’d like to be remembered.”

Even as a teen, I noticed Shirley. Today I’m dreaming that I might have spent time with her and been able to get some of those guts to rub off on me.

Today’s prompt is by Jon Batiste. His song for today is “Home” composed by Cory Wong and Jon. The prompt was to “identify someone…who, if you’d grown up with them, would have changed your worldview.” We were to write a letter to them, but instead I shared a little about one of my brave sheros. This post is also for the Slice of Life at Two Writing Teachers.

Today is Tuesday, Day 98 in Bahrain, day 63 of The Isolation Journals with Suleika Jaouad. 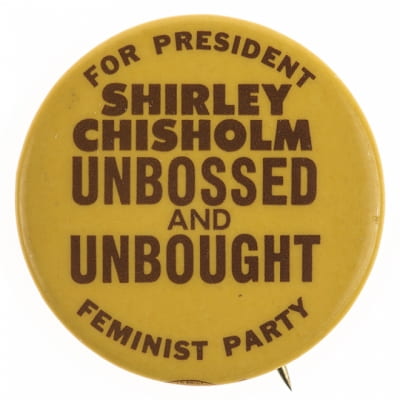 4 thoughts on “Unbossed and Unbought”