The year was 1992 and my husband was traveling for his job. My children were two and four, and we had been at some friends’ house all day playing with their kids and passing the time. As we were leaving Kevin gave me a book, The Sphere, by Michael Crichton. I have no idea if the book was any good, or if I just needed an adult book and anything would have worked. Perhaps I had mentioned earlier in the day that it had been a long time since I had read a novel, and that is why he gave it to me. Anyway, I brought it home, put the girls to bed, and started reading it. I’m not a super fast reader, but for some reason my brain devoured this science fiction book and I read it until 3:00 a.m., and when I finally turned the last page I went to bed.

Those devouring reading times have come once in a while throughout my life when I have fasted too long from reading. For the past few years of teaching grade 5, my students and I have kept track of our reading. Each year I read 40-60 books. However, the pandemic came and reading became something I neglected. I don’t know why.

However, this month reading is coming back to me, fortunately. I read Clint Smith‘s How the Word is Passed, Winn Collier‘s Holy Curiosity, and yesterday I read most of The Racketeer by John Grisham. It was awful, but mesmerizing. I just had to finish it, kind of like The Sphere all those years ago. It reminded me that I need to find good fiction and start reading again! I need fiction to disengage and relieve stress, stress internalized from the daily news as well as the nonfiction books I’m reading.

Do you have any suggestions for my next adult or young adult fiction book?

This chapter about the Juneteenth celebration at Galveston Island has helped me walk further along a new path of truth in America’s history. This passage, written by a young black man, also speaks to me, an older white woman, who learned history in a similar way with white-washing and lies to hide the deeper truths of white supremacy that people didn’t want to say aloud. We are also seeing it in our lived day-to-day history in this, the 21st century.

I watched these young people read to the audience parts of history that placed our country in context. I felt, in that moment, envious of them. Had I known when I was younger what some of these students were sharing, I felt as if I would have been liberated from a social and emotional paralysis that for so long I could not name—a paralysis that had arisen from never knowing enough of my own history to effectively identify the lies I was being told by others: lies about what slavery was and what it did to people; lies about what came after our supposed emancipation; lies about why our country looks the way it does today. I had grown up in a world that never tired of telling me and other Black children like me all of the things that were wrong with us, all of the things we needed to do better. But not enough people spoke about the reason so many Black children grow up in communities saturated with poverty and violence. Not enough people spoke about how these realities were the result of decisions made by people in power and had existed for generations before us.

Smith, Clint. (2021) How the Word Is Passed, Little, Brown and Company. Kindle Edition. 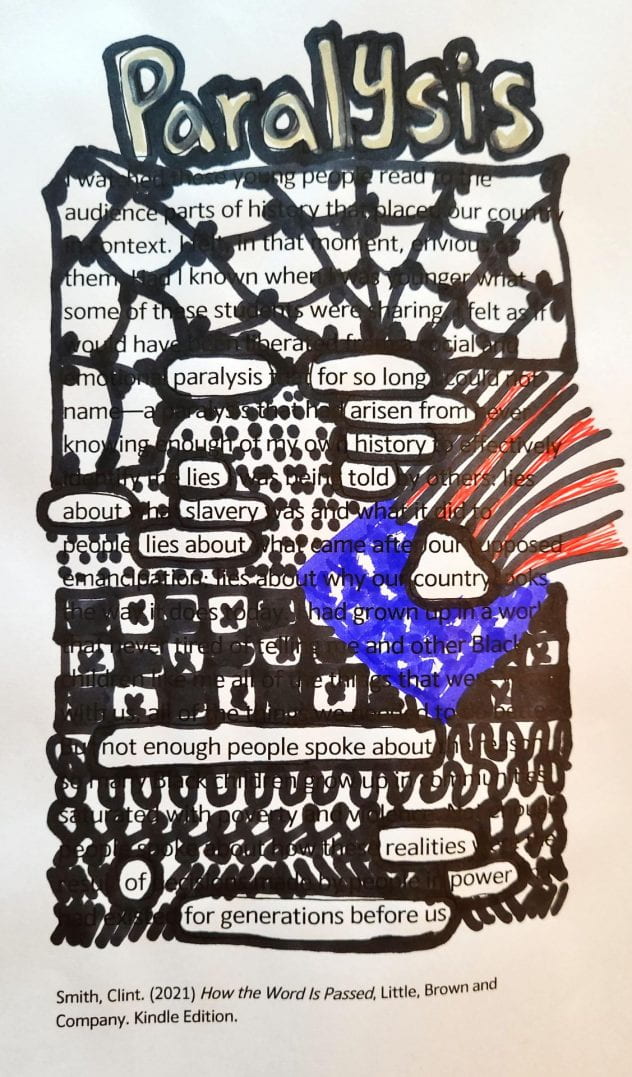 I’m trying to find a balance in how to read these rich chapters. For the first few chapters, I highlighted things I wanted to remember on my Kindle. This time I took notes in a journal. After three pages of notes and two poems, I was still only half finished with the chapter. Hmmm…I’ll keep trying. 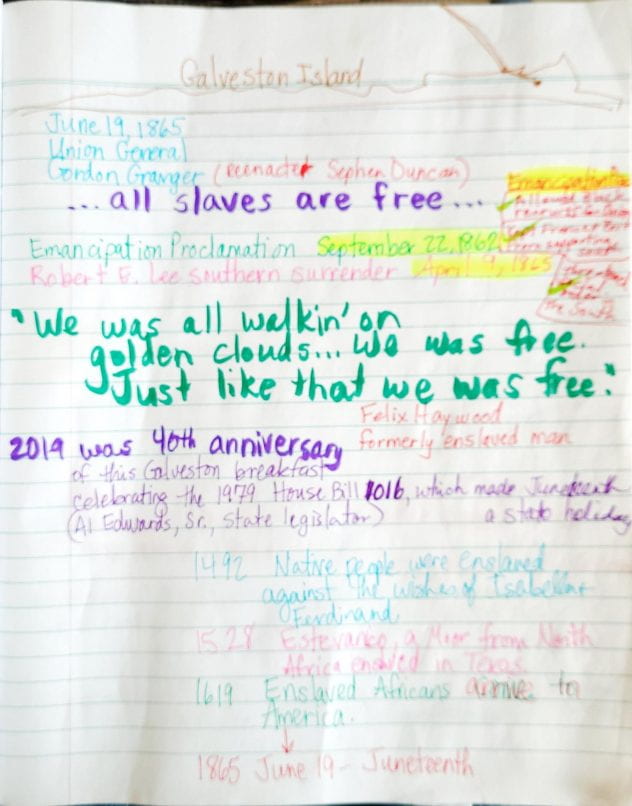 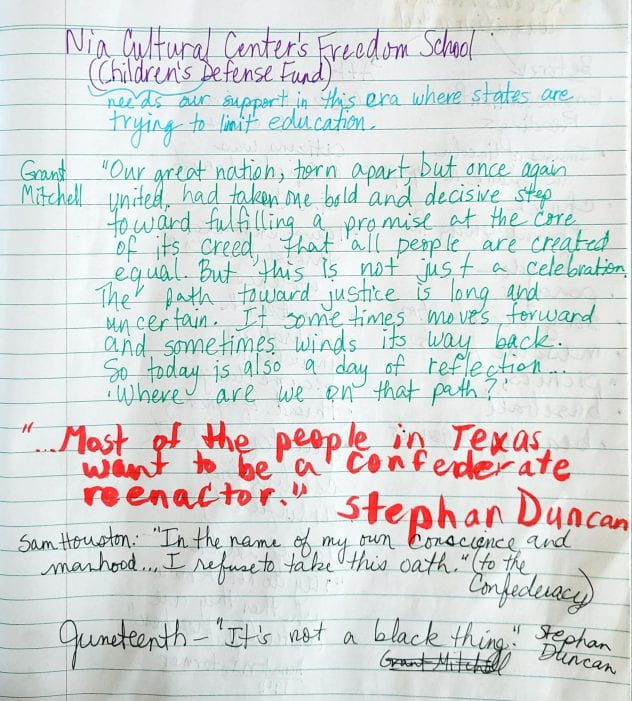 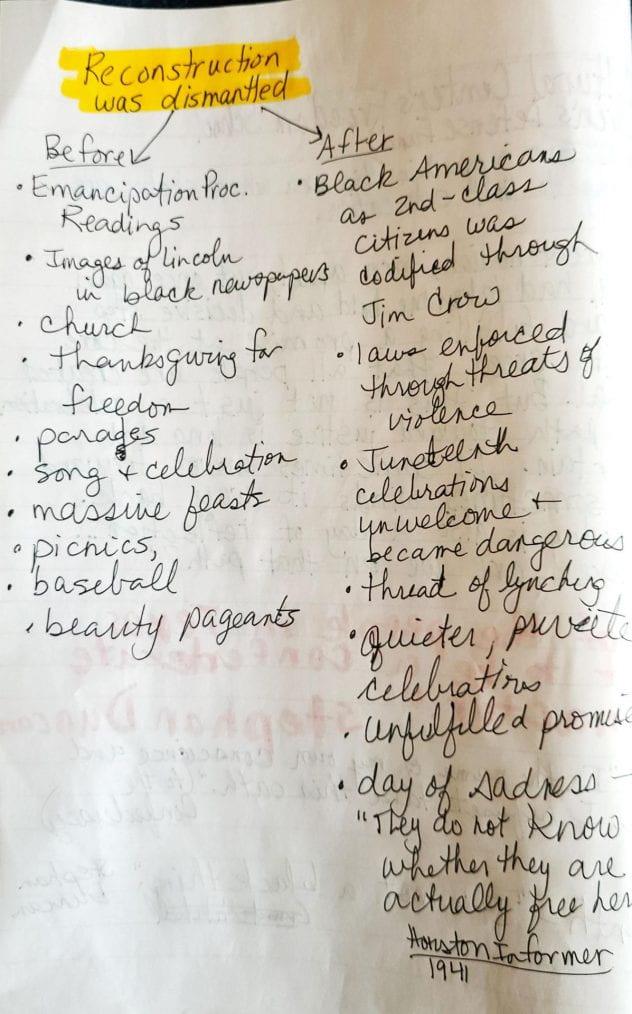 How the Word is Passed: A Reckoning with the History of Slavery Across America by Clint Smith is a book that has the power to transform us. I pray it does. As Ibram X. Kendi said, “We need this book.” I hope everyone who reads this will get a copy and read it too.

I have known Clint’s work because I listened to the Justice in America podcast, which he did the first two years with Josie Duffy Rice. This week I’ve learned more about his poetry. Here he is reading two of my favorites: “Counting Descent” and “History Reconsidered.”

“History Reconsidered” is a powerful poem that I’ve been thinking about all day. I wrote this golden shovel poem using Smith’s line: “Oppression doesn’t disappear just because you decided not to teach us that chapter.”

We Need to Write a New Chapter

We were lied to when we studied oppression
of enslaved American people. It doesn’t
count that we vaguely learned slaves disappear
when Civil Wars end. A moral, righteous and just
country would repent and repair wrongs because
white supremacy is evil. Truth. But you
can see from what’s happening today that many decided
to nurture white supremacy, and not
dismantle it in order to create a more perfect union. Some want to
halt the telling of truth, the new books that can teach
our children and adults that some Americans indeed proclaimed us
to be the land of equality and freedom, while simultaneously living the lie that
they owned other human beings. We need to write a changed chapter.

Smith’s book is full of new (and some known) content that is so heavy and difficult to hear, but Clint’s love and respect for people and his poetic language contribute to making the book a readable treasure that in fact we do need.

Here are just a few of the old quotes Smith includes that show some of the truths we were not taught:

“And if any slave resist his master, or owner, or other person, by his or her order, correcting such slave, and shall happen to be killed in such correction, it shall not be accounted felony.” Virginia Slave Code, 1705 (Footnote iv, Loc 1274)

“So far as history reveals, no other slave society, whether of antiquity or modern times, has so much as sustained, much less greatly multiplied, its slave population by relying on natural increase.”  ~C. Vann Woodward, historian, 1983 (Loc 364)

“Louisiana looks to the formulation of a southern confederacy to preserve the blessings of African slavery.” ~Louisiana’s commissioner in a speech at the time of secession, 1861 (Loc 833)

Follow along and join us in the Virtual Book Club on How the Word is Passed.

Last month just after I had purchased Clint Smith’s book How the Word is Passed, I saw this tweet by Sally Donnelly:

Just finished my 1st read of this rich, thought-provoking book by @ClintSmithIII So glad I created a virtual summer book club so I can read it again. I invite you to join me in July. Read & add a reading notebook page of your thinking to this Padlet: https://t.co/IzUyCHtMMa

I signed up at the Padlet with Information About the Virtual Book Club. She has now added the schedule, the process for sharing, a challenge to be open to being changed, and additional helpful information.

It is not too late to join in. Please consider discussing this important book with Sally, me, and other educators.

In addition, there is another book study going on this summer with the same book. The two studies align well, as Sally’s study will be throughout July, and this one goes a bit later and concludes with a visit from the author.

Join @JoelRGarza, @TheTattooedProf, and me three times this summer to discuss How the Word is Passed: on Twitter 7/18 for the first half of the book; on Zoom 8/8 for the second half, and then on Zoom 8/18 to listen to Dr. @ClintSmithIII himself! pic.twitter.com/GQbdZkmnte