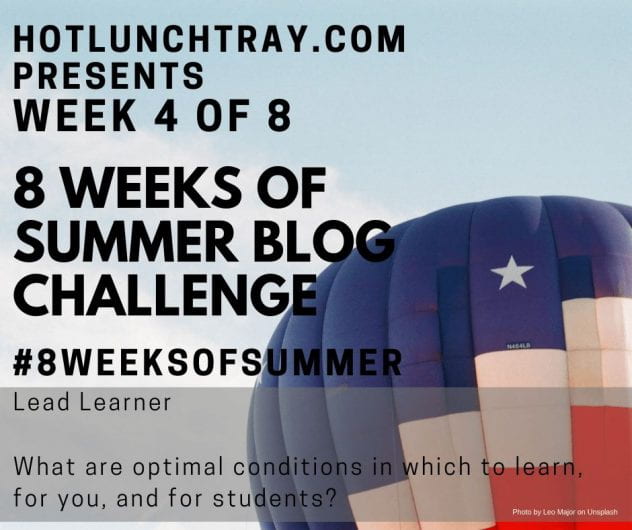 This post is week 4 of 8 in the 8 Weeks of Summer Blog Challenge for educators.

What are optimal conditions in which to learn, for you, and for students? What a great question. I have spent the last decade really grappling with this question, but not taking time to really try to come up with the answers.

When I became what I called a “connected educator,” I learned so much. I became the chief learner in my classroom. 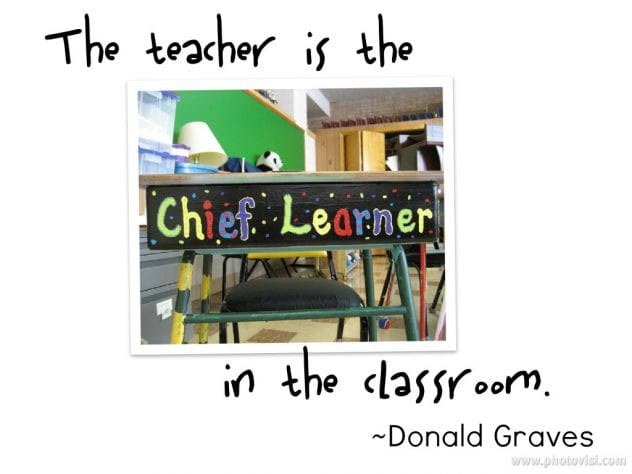 I passionately tried to teach my students to love learning and go for broke.  Some of my thoughts from 2012: 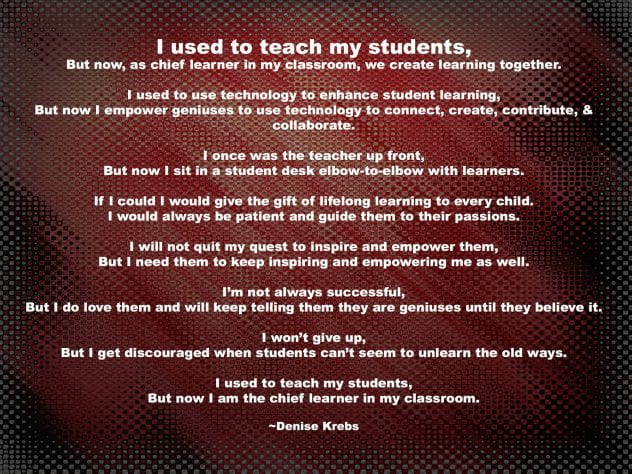 Then I moved to a new country, where the culture is so different. The educational values are not what I was used to. Education here is what I describe as more traditional. Students and parents are more competitive and good grades and being on the honor roll are the pinnacle. I have weathered my share of storms as I try to navigate this new educational landscape.

Now, this week, for the #8WeeksofSummer challenge, I was asked the question about what are the optimal learning conditions for me and my students. Today, I have a more nuanced answer than the 2012 writing above.

I have never before stopped to articulate what I think about the colliding of my experiences in eastern and western schools. I’ll take a stab at it today, but really these are just some random thoughts: I’ll keep grappling!

I don’t think I have answered the question, but here are a few optimal conditions for learning worldwide:

I guess these are conditions that work for me and students.

What about you? What are your optimal learning conditions?

Last week I entered into my first chat on Twitter. Here’s how it went. Since I’m teaching Children’s Literature right now to undergraduate future teachers, I wanted to add Twitter as part of our curriculum. I made it optional, but I was pleased that each of them was interested. I was looking for a chat that we might participate in together, so I sent out this tweet hoping to hear from librarians or teachers who were discussing children’s literature.

Within a few minutes I received a reply from Greg Pincus:

“Great!” I told him, “I’ll be there.” Or something like that, in a tweet. I didn’t have enough time to forget or get too nervous because it was within the hour. I set the timer on my computer, so I wouldn’t work right through it.

The participants were authors of children’s literature, and the topic was “Why kidlit?” They were celebrating the second anniversary of the #kidlitchats. There were wonderful inspiring messages in 140 characters or less, like:

And somewhere in there Jennifer Prescott added this tweet.

That was fun! After the chat I signed up for the drawing, and I was surprised to find out a couple days later that I won, along with two others of her blog followers. How fun is that?

She does this with some regularity, so check out her blog, The Party Pony, for the August giveaway.

Anyway, that was a long introduction to say that I had waited all this time to really get involved in a chat, and it was worth it! The writers were gracious and interactive. I learned some things, hopefully contributed a bit, and won some books for my classroom. All in one hour, sitting in my jammies.

Another great example of 21st century learning and growing that can happen on Twitter!