Yesterday I listened to the whole one-hour phone call by our disgraced president to Georgia election officials, with attorneys present. If you haven’t listened, here he is, the resident of the White House:

Then later in the day I watched the complete press conference with Gabriel Sterling, voting systems election official, from Secretary of State Brad Raffensperger’s office.

When I watch them both, it is obvious there are not two sides to this issue. What can we make of this coup attempt? How can there be any doubts?

Regarding a lying, debunked Q-Anon conspiracy theory, trump said this:

It’s going to be costly, yes. Costly to the inhumane, racist and misogynist system that America was built upon. Hopefully, these last four years have opened the eyes of enough Americans that we will keep paying the costly price for a better future.

Yes to the truth! Truth has been knocking on the door of the system for centuries, and trump has made it knock louder and with more urgency than it did before. He doesn’t want Truth; he just wants to be declared the winner.

“The arc of the moral universe is long, but it bends toward justice,” Martin Luther King, Jr., observed with expectation. He was co-pastor of the Ebenezer Baptist Church in Atlanta. Today millions of Georgians are voting for Raphael Warnock, who is currently serving as senior pastor of Ebenezer. That is such a beautiful step forward.

We are living in history, and someday we’ll look back on this historic chapter and hopefully be able to say that the moral arc took a big lean toward Truth and justice in this era.

I do not believe that anyone in power is objecting to the election in good faith. These people cannot really believe the lies over the diligent work of Republicans Brad Raffensberger and Gabriel Sterling, who are showing that they are the real patriots here. The twelve senators and 140 representatives who on Wednesday choose to exploit the president’s mental illness for their own selfish ends will go down in history, and not in a good way.

If you are one who still believes the election was stolen, I would love to hear why. 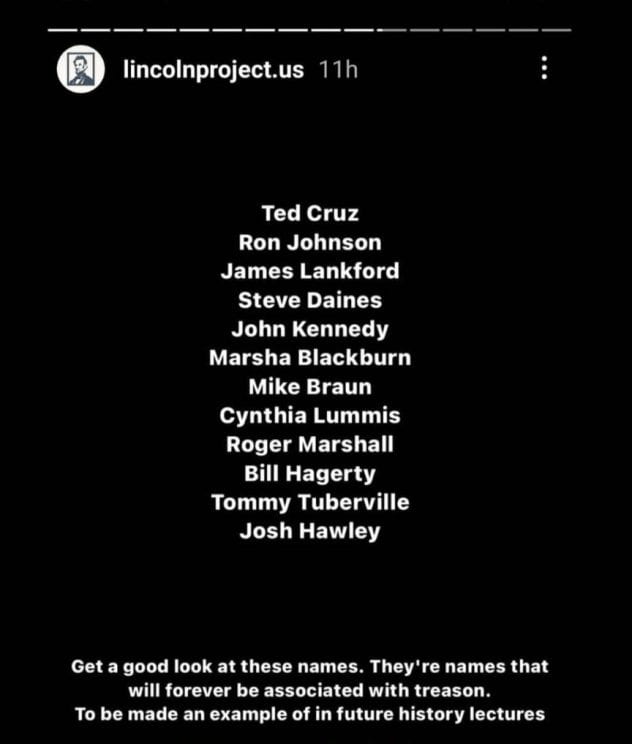