So we just wrapped up the third Zoom Spelling Bee of the day! And now we are officially on spring break.

Three weeks or so ago I wrote about initial ideas for our final Spelling Bee. Here’s what I thought then:

Here are some of the successful changes we made.

We gave the children a list of words to practice and a book to read.  Here are the lists we used: Amber, Ruby, Sapphire. We had three separate events for each leveled group. (The levels were created by an online Google preliminary round; students were placed according to their scores on the preliminary.)

One big change happened that we didn’t discover until the first group did Round 1. One of the students told us when he and his dad were practicing that the auto-correct chat featured fixes words. OK, yes, indeed! Why didn’t we think of that? Auto correct on Zoom is spectacular. The next time you are in a Zoom meeting try misspelling a word in a chat message! So, the first group got 5/5 correct in Round 1. For the next two groups we didn’t do Round 1 like this. Instead, we had the students in the second group write five words on their whiteboard. Then we checked them all at one time. For the youngest ones, we had them write the words one at a time.

Then we did Round 2, which was spelling on the whiteboards with fewer, harder, and higher-point-value words. Last time I wrote about the spelling bee, Melody Parker suggested the students show their whole body, which we kind of did. We’d have students stand behind their chairs with the whiteboards for Round 2. It was a really good view and we could see them writing.

Round 3 was two rounds in a traditional oral spelling bee style. Three points for each word spelled correctly in this round, and no eliminations for spellers who missed their words.  For Rounds 3 through 5, the students also stood behind their chairs and had their hands up. They could just hold them up or pretend to write on one hand with the other hand as the stylus to help them with the spellings.

We also had Round 4, which had words from a book we asked the children to read (from our online library subscription). We gave each child one word from the book. (Round 4 was especially hard for the youngest ones in the Amber group below. You can see only two spelled their word correctly.)

Finally, we had a Finals Round for the top scorers. It was a single elimination round, which determined the winner. The scores were only used to help determine the other places, if needed, as in the example below.

The school classes were cancelled for today, so other students could watch the Spelling Bees, which were live-streamed on YouTube. We played the national anthem, the principal or vice principal took turns thanking and greeting the participants and spectators and each person introduced themselves. Two or three volunteer teachers came to each room to be judges. There were three of us on the Spelling Bee design team, and we each were able to be in all three groups–to host the Zoom, to answer questions, and help during the scorekeepers breakout meeting.

We were thrilled that each of the three bees went off successfully. They were much better than we thought they would have been. The goal of this project in the Learning Inclusion Department was to give an opportunity for enrichment for our talented and gifted students.  It was a joy to see these excellent students be in the limelight for a day. It seemed like they were proud and happy to be there.

Two suggestions for next time: Schedule 90 minutes for each, instead of 60 minutes. The second group was scheduled right after the first one, so it got a late start. Also, Group 1 needs fewer rounds and a shorter list to study. 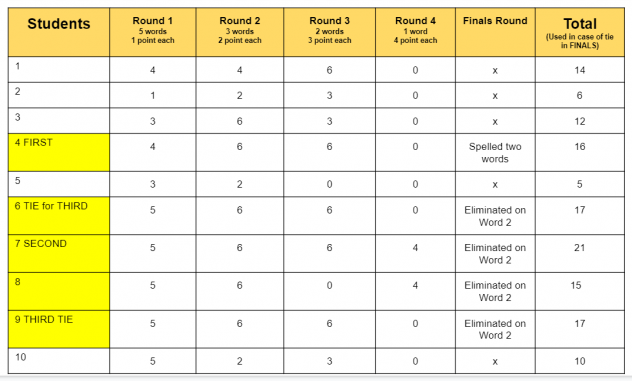 6 thoughts on “Spelling Bee Wrapped Up”