Today I heard a quote in an interview with Joe Biden that I decided to use in my own Golden Shovel. He was talking about why he’s an optimist and always keeps the best of people and builds on the positive in his relationships. He said, “I believe in redemption, for myself, as well.”

Of course, redemption is such a full and beautiful word. I couldn’t help but think of Jesus Christ, who is the one inspiring Joe Biden to stay so optimistic. So I wrote this Golden Shovel poem today as if Jesus were talking to the woman in John 8:2-11, a story that’s been on my mind all week.

Every bent branch I
Will lift up. Do believe
You are restored in
Me with no regrets, only redemption.
Recovery and release for
All that weighs heavily. Myself,
I am grace enough, as
The eyes of your heart see: you are well.

This post is week 3 of 8 in the 8 Weeks of Summer Blog Challenge for educators. 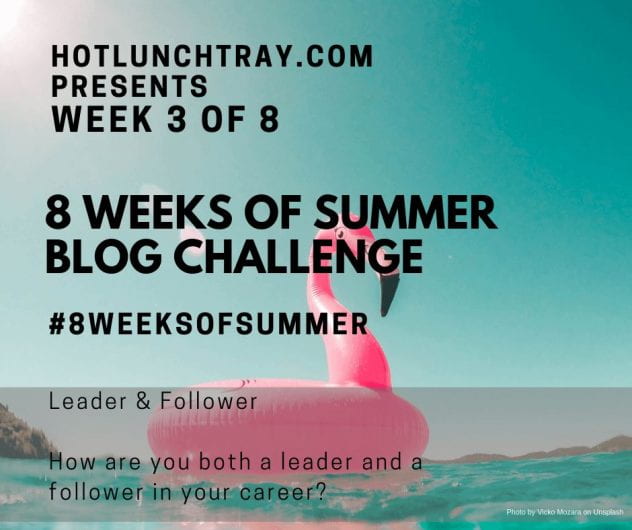 How are you both a leader and a follower in your career?

Jesus said some important words about leadership and following. I will answer this question with his words first.

One time when the mother of two of his 12 disciples came to Jesus, along with said disciples. They asked if they could be his right- and left-hand men. Then this happened:

When the ten others heard about this, they lost their tempers, thoroughly disgusted with the two brothers. So Jesus got them together to settle things down. He said, “You’ve observed how godless rulers throw their weight around, how quickly a little power goes to their heads. It’s not going to be that way with you. Whoever wants to be great must become a servant. Whoever wants to be first among you must be your slave. That is what the Son of Man has done: He came to serve, not be served—and then to give away his life in exchange for the many who are held hostage.” Matthew 20:25-28

Leaders should be servants. That means a lot of humility in dealing with people I’m leading. Though I am too proud, with the grace of God, I have become more and more a servant leader in my life, including my career life as an educator.

Another thing Jesus said is about following.

Then he called the crowd to him along with his disciples and said: “Whoever wants to be my disciple must deny themselves and take up their cross and follow me. For whoever wants to save their life will lose it, but whoever loses their life for me and for the gospel will save it…” Mark 8:34-35

Following Jesus is another priority in my life. Thankfully he helps me because denying myself is not a natural inclination.

Leading like Jesus and following Jesus have made me a better leader and follower.

Alert: I don’t typically write about politics or religion, so I’m forewarning you. Turn back while you can…

For close to 40 years, I have been registered to vote as an independent. I’ve never liked political parties, and I still don’t.

Today is Constitution Day, September 17, 2012, the 225th anniversary of the Constitutional Convention’s signing of the U.S. Constitution.  In school we are celebrating this day, also called Citizenship Day. Because of that, I suppose, I spent some time this weekend considering the preamble.

As I said at the beginning, it is unusual for me to write about politics; I’ve been fairly apolitical throughout my life. However, it was just last week in a blog post, that I first called myself liberal — I’m liberal with my photographs, I said. Today I feel I am a liberal for two more reasons.

First, I believe the Constitution’s preamble gives a fairly liberal agenda that necessarily calls for a strong government if we are to provide these things:

We the People of the United States, in Order to form a more perfect Union, establish Justice, insure domestic Tranquility, provide for the common defence, promote the general Welfare, and secure the Blessings of Liberty to ourselves and our Posterity, do ordain and establish this Constitution for the United States of America.

In addition, I am a follower of Jesus. Each day I read a chapter in the Bible, and yesterday my bookmark happened to be at chapter 10 of Mark. Here are just a few quotes from this one chapter:

About divorce: “What God has joined together, let no one separate.”  verse 9

About heaven: “Whoever does not receive the kingdom of God as a little child will never enter it.” verse 15

About wealth: “Go and sell what you own, and give the money to the poor, and you will have treasure in heaven; then come, follow me.” verse 21

“It is easier for a camel to go through the eye of a needle than for someone who is rich to enter the kingdom of God.” verse 25

A liberal question: “What do you want me to do for you?” verse 51

About faith: “Go, your faith has made you well.” verse 52

There are 88 additional chapters in the gospels about Jesus’ life on earth. Besides the things above, he said much more — impossible, crazy, profound, amazing, revolutionary, liberating things — like “Don’t be afraid”, “Do not judge”, “Be perfect”, and to the religious hypocrites: “You snakes!”

I believe the government was ordained and established to help all its people, and I want to be like Jesus, so I guess I am a liberal.

The Preamble to the Constitution YouTube Resources on Diigo 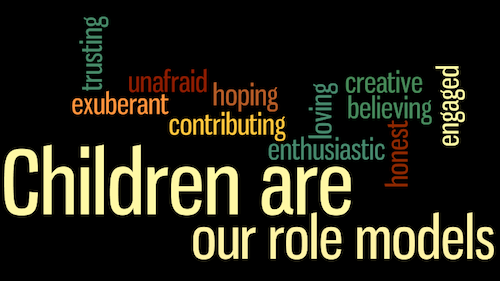 I have spent my whole adult life with children–aiding, being a stay-at-home mom, and teaching. On occasion I have wondered what my life would have been like if I had taken a different career path. Who knows? But there is one thing of which I am sure. I would not be the person I am today. Children are role models for how we should live our lives.

Children are hoping, believing, engaged, contributing, loving, creative, forgiving, enthusiastic, exuberant, unafraid, humble, trusting, and I could go on and on. How could we ever learn these things without children? They are our role models.

Jesus said children were our role models of faith. When his disciples tried to keep the children away from him, Jesus became livid, “Don’t push these children away. Don’t ever get between them and me. These children are at the very center of life in the kingdom. Mark this: Unless you accept God’s kingdom in the simplicity of a child, you’ll never get in.” (The Message, Mark 10:13)

And another time, he warned them: “…if you give [the children] a hard time, bullying or taking advantage of their simple trust, you’ll soon wish you hadn’t. You’d be better off dropped in the middle of the lake with a millstone around your neck. Doom to the world for giving these God-believing children a hard time! (The Message, Matthew 18:6)

What a humbling and sobering warning! I try to take this warning seriously as I learn and grow with my students. (And praise God for his grace when I make mistakes.)

Overall, today I am just feeling so lucky to be spending my career with children. 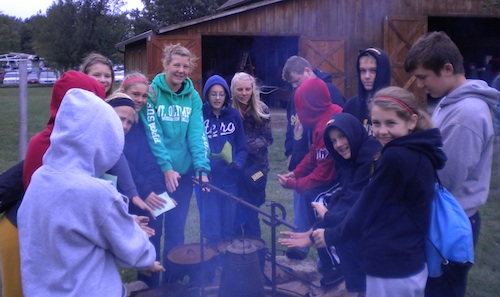