Today we drove into Palm Springs and picked up my good friend. She gets to stay for two days. This is an iconic view of Palm Springs. I never tire of seeing it.

We took a walk partially up a small mountain near home. Here’s a picture of our house from our walk. 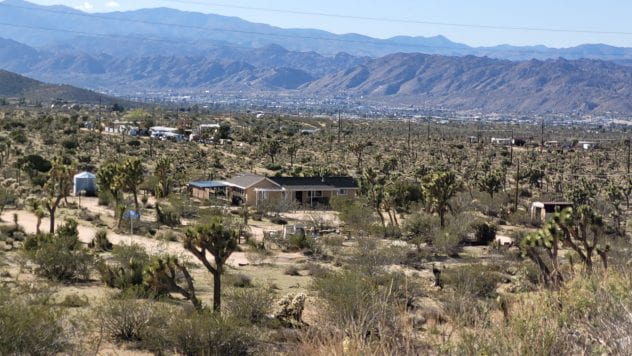 Here is a first in months. I am sitting here after midnight. Usually I’m in bed between 9 and 10. I’m up now listening to The Crown (S2 E5) and the howling wind. We’ve had a few days of really warm weather, and tonight it is turning a bit colder. We may have rain tomorrow.

Yesterday we hung up the window trimming on our freshly painted house (white replacement windows coming in June, and a screen door makeover soon). I stained and waxed a book shelf, and I hung up some lattice between our house and car port. And I haven’t slept yet, so I’m posting this very short sliver of life before I go to bed. 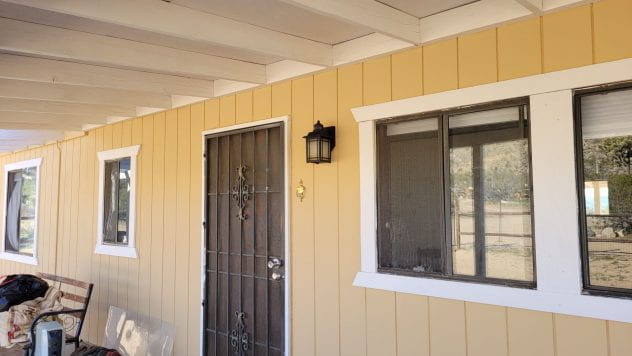 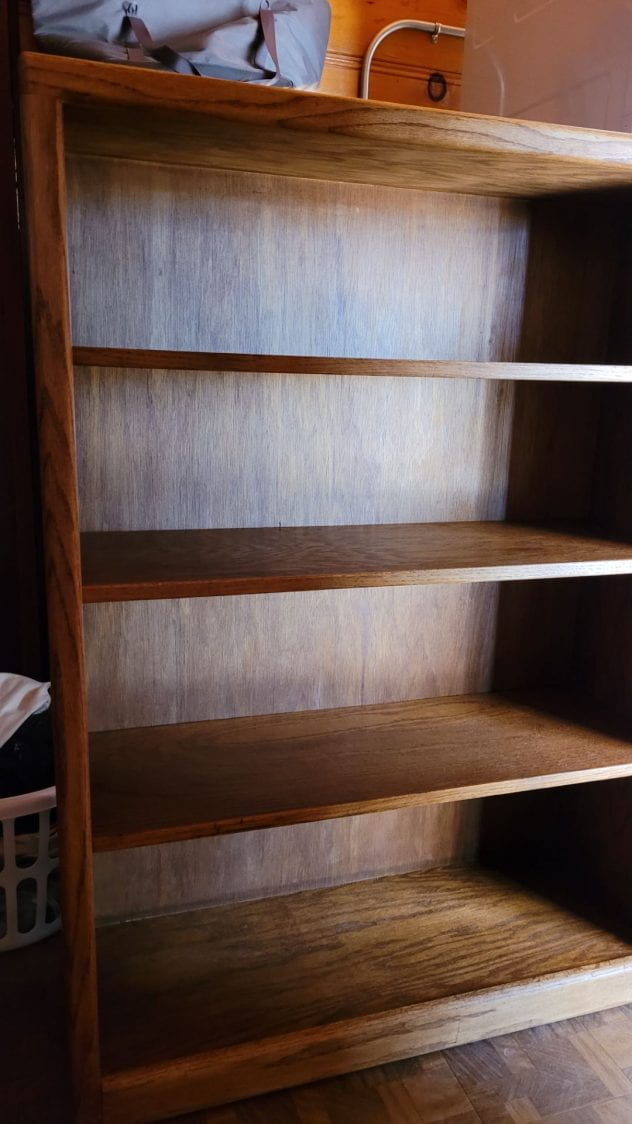 Claire Landrigan and Erika Victor each wrote six-word memoirs about the last two years. Like Erika, I have a few…

How did we ever do it?

Glad we didn’t know how long

Will we ever be the same?

Or can we be better instead?

Today there was a yard sale in my yard. When we moved here, there was so much extra stuff in our yard and house, and my sister has even more extra stuff than we do. She brought things over and we hung up signs with balloons inviting people in to look around and buy.

I’m always touched by how friendly people are in our new town. It was very interesting to hear people’s stories and see what they were interested in buying. It was a good day.

After a day of working outside, I am now sitting in my home, looking out at the porch. Where I used to see three random mix-match colors of paint,  now I see all the same shade of Timid White. I’m enjoying the cooling air of our new H-VAC system, as today was the first day that went over 80 F. I’m writing a quick post because I’ll be leaving in twenty minutes to go out for dinner with my brother and sister-in-law, who helped us finish painting our home. Dinner will be at Kimi Grill for Japanese food. I am a happy woman.

In the past three homes we’ve owned, it seems every time we did any home remodeling or updates, we moved within a year or two. Did we know we unconsciously know we were going to move, so we were getting ready to sell it at a better profit? Or was it just bad timing. This time, however, in retirement, I am doing the work just for us and our friends and family. It has made all the difference. I have more respect and love for our little cabin with every brush stroke, nail, and rake of the yard. (Almost) every day I am motivated to get up and work.

I hope you all enjoy the Slicer Meet-Up! I enjoyed the last one. However, tonight the sushi is calling me.

This morning I had a first. I had to run to Home Depot to get some gloves for painting. My brother and sister-in-law were coming to help. (Praise God!) So, I was in a bit of a hurry. I got to the store and went in. I don’t remember a bell ringing as I left the car, but I’m guessing it was.

I went into the store. I picked up the box of gloves and a couple paint roller trays, paid a the self-checkout counter, and went back to my car. For some reason, the door was unlocked. I got inside and realized it was already running. I had forgotten to turn off the car when I went into the store. It won’t lock when it’s running, and it gives a warning, but I must have unconsciously ignored it. It is such a quiet car; when it’s idling it uses the battery only. (We bought a hybrid RAV4 when we moved back to the U.S. in January.) I’m glad no car thieves were present this morning!

The painting went well. With all four of us busy, we finished the main painting job. Now, just some details to do over the next couple of days.

“What stories have you been told about yourself as a baby?”

Chapter 1
My mom was in the hospital the next morning looking in the window at all the babies. Another woman in a hospital robe came to the window too. They were there to admire their babies, and each others. My mom pointed me out, apologetically, “She has a mark.”

My mom thought the woman was bonkers to think that a red birthmark on the face of her new baby made her lucky in any sense of the word.

“Yes,” she said, “My two-year-old at home has a bumpy strawberry birthmark on the bridge of her nose. You’ll be able to cover your baby’s birthmark.

“Angel kissed,” is how my grandma always described my birthmark.

Chapter 2
I was several months old when I got sick and couldn’t keep anything down. My mom got a ride to the doctor’s office with me in tow. The doctor was just leaving, but he stopped and examined me. He pinched the skin on my belly, and it pulled up and stayed where he pinched it. He told her I was dehydrated and for her to stop at the store and buy a Coke, shake the bubbles out of it, put it in a bottle and fed it to me. She did, and she always reminded me how I grabbed that bottle with my hands and sucked it down. I got better after that.

Chapter 3
When my older sister went to kindergarten, she always came home with stories. One day she came home and told my mom, “Terry at school doesn’t believe that Jesus is real.” I was listening and responded, “What does she think, that he’s made out of rubber?”

Chapter 4
My father had seven kids and didn’t want the neighbors to think we didn’t have enough food, so he was known to load up our plates. One time I asked for more meat, and held out my plate to him. My dad took a spoonful of mashed potatoes and plopped it down onto my plate, or so he thought. Instead, I pulled my plate back just as the potatoes slammed onto the table. “More meat.” My older brother and sisters around the table looked sheepish and tried not to laugh. My dad was not the type that would have thought that was funny. However, surprisingly, he had a slight upturn of his mouth and gave me more meat (and no potatoes).

I was inspired by Ramona’s Spider Stories post, which was a featured inspiration on Two Writing Teacher’s on Sunday.

I was inspired by a post earlier this month by Terje at “Just for a Month.” She wrote 50 good things because she was turning 50. I’ll be turning 64 this year, so I wrote 64 good things.